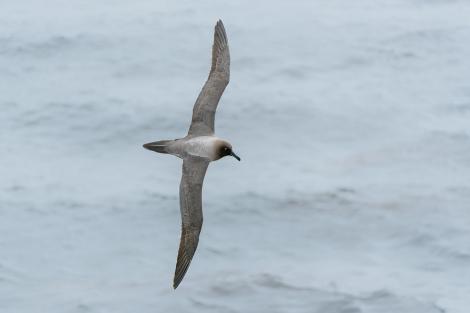 The light-mantled sooty albatross is a small dark albatross, with a body form honed for rapid flight. It has a dark sooty-brown body and head, with greyish-brown neck and back feathers, which distinguishes it from the similar-looking sooty albatross. The bill is dark with a pale blue stripe along the lower mandible, and there is a crescent of white feathers around the eye, giving the bird a slightly comical aspect.

The light-mantled sooty albatross is one of a pair of sooty albatross species that have extremely pointed wings, wedge-shaped tails, and chocolate-brown colouration. Their flight is effortless, and courting birds at breeding grounds are often seen in pairs in a synchronised aerodynamic display. The light-mantled sooty albatross is brown all over, except the greyish-brown mantle and back, which give it its name. A white crescent of feathers around the eye, and a pale blue stripe along the lower mandible contrasts with otherwise black bill and dark-brown head.

Voice:  light-mantled sooty albatrosses are generally silent at sea. At colonies they give the characteristic ‘sky call’ pee-aahh, and a braying threat call used to challenge other albatrosses and humans. Bill snapping is also common.

Similar species: the sooty albatross has a dark-brown back, and a cream or yellow (not pale blue) stripe on the lower mandible. Note that sooty albatrosses in worn plumage have a pale whitish cream to buff collar contrasting with the dark face. Giant petrels (juveniles and immatures of both species) are all dark but are larger, heavier and bulkier looking, with a proportionately larger head and a distinctly pale (not black) and massive bill. Black-footed albatrosses have a pale area at the base of the black bill. Juvenile wandering albatrosses, which are even larger and heavier looking, are also mostly dark brown, but have a white face mask and underwings, and a pale pinkish bill.

Light-mantled sooty albatrosses are found around the Southern Ocean, with a circumpolar breeding distribution. They are thought to frequent less productive areas of the ocean, and are not commonly found on shelf-breaks or frontal zones. Due to their lack of tolerance of handling, few satellite tracking studies have been undertaken. They forage in Southern Ocean waters from 40° S to the Antarctic ice edge, and are perhaps the most southerly foraging of all albatross species. Light-mantled sooty albatrosses tend to be solitary at sea, and don’t follow vessels or scavenge on fisheries waste to the same extent as most other small albatrosses.

Their breeding habitat is in cliffy areas of the subantarctic Islands, where they tend to nest in small groups spaced widely apart.

In the New Zealand region light-mantled sooty albatross nest on the Antipodes (250 pairs), Auckland (5000 pairs) and Campbell (1600 pairs) Islands and on nearby Macquarie Island. The New Zealand populations account for around 30% of the global population, with a world total of around 20,000 breeding pairs. Population trend information is lacking for New Zealand sites.

The main documented threat for light-mantled sooty albatrosses is mortality in longline fisheries, especially on the high seas, where the main overlap of the species’ range and the fisheries occurs. However, specific information is lacking as there is very little scientific observer deployment in these fisheries. Occasional captures in monitored fisheries indicates that the species has very low capture rates in longline fisheries.

Light-mantled sooty albatrosses breed as monogamous pairs in the austral summer, over an extended period. Like the great albatrosses, but unlike mollymawks, they breed once every two years. The single large (102 x 65 mm) white egg is laid in October or November; incubation is shared and takes about 67 days, with most hatching in December. The chick is fed by regurgitation by both parents, and fledges in May-June.

Light-mantled sooty albatross diet has been studied at South Georgia, Crozet and Prince Edward Islands. It feeds mainly on squid (33-56% of diet by fresh mass), followed by fish (10-45%) and crustaceans (4-40%), with large variation in the importance of these last two groups by breeding site. Analyses of squid species present in the diet show that light-mantled sooty albatrosses feed closer to the Antarctic than other albatross species.

A small dark brown albatross with a pale greyish-brown mantle and back, extremely pointed wings, long pointed tail, a white crescent around the eye, and a pale blue stripe along the lower mandible in contrast with the otherwise black bill and dark-brown head. Their flight is effortless, and courting birds at breeding grounds are often seen in pairs in a synchronised aerodynamic display.

Two-tone wail from male, single note from female while copulating