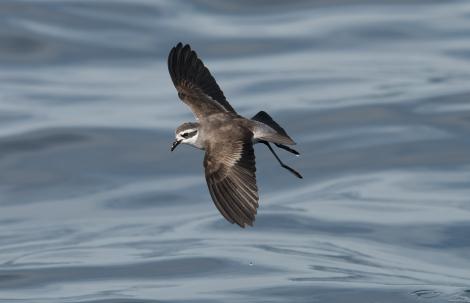 White-faced storm petrels are very small seabirds well known to fishermen and boaties venturing a little offshore as “Jesus Christ Birds” as they are often seen walking on water. When feeding they move in bounding hops with little wing action and hover in place, paddling to pick up food.

They breed in colonies on small islands scattered irregularly around the New Zealand coast, returning for parental duties at night. Their small size makes them extremely vulnerable on land and they are only able to breed on islands that are totally free of exotic predators.

They are only found in the seas around New Zealand for the duration of the breeding season (August to April) migrating to the tropical eastern Pacific for the off season.

White-faced storm petrels are a little smaller than a blackbird, and are lightly built. They are grey above with darker grey wing tips and tail and underneath they are mainly white. Seen closer they have a white face with a broad dark-grey stripe through the eye, not reaching the bill and their legs are black with yellow webs on the feet. Their wings are fairly broad and their legs very long and often dangling. Movements of white-faced storm petrels over the water are usually highly distinctive, travelling in a series of hops striking the water with both legs held stiffly together and bounding in high little arcs over the water with the wings spread or raised. They are also capable of level flight with head down, a steady wing beat and feet extending well behind the tail.

Voice: White-faced storm petrels are silent at sea, but birds on the ground make cooing calls at the breeding colonies.

White-faced storm petrels are pelagic birds usually found near the edge of the continental shelf and over upwellings in the very deep water beyond. In New Zealand they are tied to their breeding colonies and often seen much closer to shore. After breeding they migrate to the eastern tropical Pacific and have been recorded from the vicinity of the Galapagos to the seas offshore from Ecuador.

One of the very few winter records was identified as being a bird of the Australian subspecies P.m. dulciae (dead on Muriwai Beach, Auckland, May 1983).

White-faced storm petrels breed in burrows and under dense vegetation on many small offshore islands all around the New Zealand coast, and on the Chatham and Auckland Islands.

The white-faced storm petrel is a fairly common bird at sea, especially near the larger breeding concentrations off the Chatham Islands and north-eastern North Island. At least a million breeding pairs breed in the New Zealand region. The largest colony, on Rangatira Island (Chatham Islands) was estimated at 840,000 pairs, with 10,000 pairs on Hongiora Island, Alderman Islands. Most other colonies around the mainland probably have between a few hundred and a few thousand breeding pairs.

White-faced storm petrels are small and extremely vulnerable to exotic predators on land, even mice, and so they breed only on predator-free islands. Their ability to expand into new habitats was shown by the rapid recolonisation of Burgess Island, Mokohinau Islands, from other islands in the group, following rat eradication.

White-faced storm petrels burrow into shallow soil, mainly on the flat tops of islands. Where they burrow in deeper soil (e.g. Rangatira Island), many burrows are taken over and enlarged by larger petrel species, e.g. broad-billed prions and common diving petrels. White-faced storm petrels also nest in or under dense mats of vegetation such as iceplant, Muehlenbeckia vine and rushes.

White-faced storm petrels breed as monogamous pairs, often in dense colonies. A single egg is laid per season (October to December) and both parents share incubation and chick care. Eggs may be left untended at times, but the egg is resistant to chilling, and hatching has been recorded after a 92-hour abandonment. Incubation takes about 50 days, and the chick fledges when 52-62 days old, with most chicks fledging in March or early April.

White-faced storm petrels are often solitary at sea, but small flocks form over good patches of food which they seem to locate from some distance by an acute sense of smell.

White-faced storm petrels mainly eat planktonic crustaceans and some small fish, picked up from the surface of the water.

Imber, M.J. 1984. Migration of white-faced storm petrels Pelagodroma marina in the South Pacific and the status of the Kermadec subspecies. Emu 84: 32-35.

A medium-sized storm petrel, grey above with darker grey wing tips and tail, mainly white underparts, a white face with a broad dark-grey stripe through the eye, and black legs and yellow webbing. In flight, the wings are broad and the long legs dangling; they move over water in a series of hops striking it with both legs held stiffly together and bounding in small high arcs.

Birds on the ground