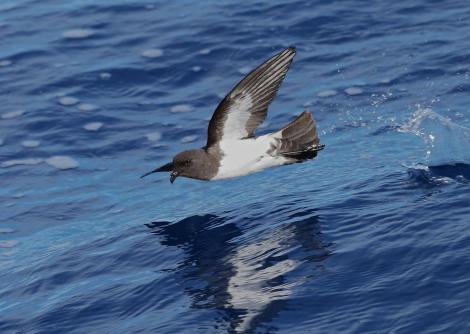 The white-bellied storm petrel is a small, uncommon, little-studied seabird that nests only on remote islands. The species has a few widely dispersed breeding sites in the South Pacific, South Atlantic and South Indian Oceans and was only discovered nesting in the New Zealand region in 1966. The specific name is derived from the Latin grallae meaning stilts, which is presumed to refer to the birds’ long legs.

The white-bellied storm petrel is a small black-and-white storm petrel with a black ‘hood’ and a white rump. Dorsally the plumage is mainly blackish but birds in fresh plumage have distinctive white tips to their dorsal feathers. Ventrally the feathers are largely white but the plumage can be variable, so that the rump and underside may have considerable numbers of darker feathers (observed on Curtis Island, Kermadec Islands). At Lord Howe, some birds are almost entirely dark. The beak, legs and feet (including webs and claws) are black and the claws are distinctly flattened. Birds of all ages and sexes have similar plumage.

Voice: white-bellied storm petrels are generally silent but birds at nest sites give soft high-pitched twittering calls, such as pee-pee-pee-pee repeated up to 20 times.

Within the New Zealand region and Tasman Sea, the white-bellied storm petrel breeds only at the Lord Howe and Kermadec Islands. It is a pelagic seabird so spends most of its life at sea and, in New Zealand waters, is usually seen only near the Kermadec Islands. There are six claimed records from further south, but most of the sight records may have been of New Zealand storm petrels, which were not considered as a possibility before their rediscovery in 2003. Records reported as white-bellied storm petrels include: 2 off Farewell Spit (November 1969), off the Poor Knights Islands (December 1969), Waikawa Beach (July 1975), Ninety Mile Beach (April 1978), Piha Beach (May 1985), Hauraki Gulf (January 1991); only the 1978 record is undoubtedly this species. The local subspecies of white-bellied storm petrel has a mainly tropical distribution and ranges or migrates as far as the Coral Sea and eastern tropical Pacific Ocean, but some remain close to the breeding colonies throughout most of the year.

The white-bellied storm petrel is rare in New Zealand. Up to 700 have been estimated to nest on Macauley and Curtis Islands in the Kermadec group, with the stronghold being Curtis Island where 23 adults were caught in 1989. More than 1,000 pairs may nest at the Lord Howe group but the species is extinct on the main island. Rare at-sea sightings off the Kermadec Islands are normally of single birds.

Poorly known. On Curtis Island, a single, long-abandoned fragmentary egg, thought to be of white-bellied storm petrel, was found in 1989, and a small downy chick, estimated to be three weeks old, was found on 21 May 1982, which suggests that laying occurs from April. A dead nearly-fledged chick was found on Macauley Island on 3 August 1966, which indicates that it came from an egg laid in April-May. At other nesting sites, the species breeds in loose colonies and the egg and chick period is January to May.

The rarity of this species partly accounts for its relative inconspicuousness both ashore and at sea. Ashore it is strictly nocturnal. At sea, white-bellied storm petrels fly low above the water, usually gliding and pushing off the water’s surface with their legs.

White-bellied storm petrels consume small squids and crustaceans but little detail is known. They feed by skipping across the water surface and dipping to catch prey.

A medium-sized black-and-white storm petrel with a black ‘hood’ and white rump, mainly blackish above and largely white below, although this plumage can be variable, so that the rump and underside may have considerable numbers of darker feathers. The bill, legs and feet are black and birds in fresh plumage have distinctive white tips to their dorsal feathers.

Bird calling while being handled