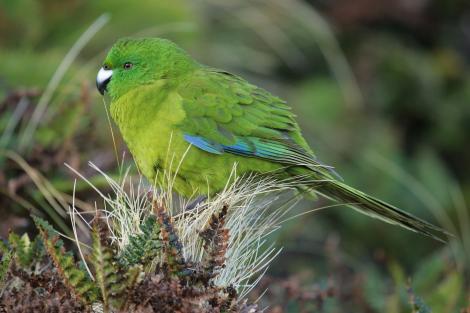 The Antipodes Island parakeet has one of the most unlikely back stories of any New Zealand bird. It was named by the artist, illustrator and poet Edward Lear (1812-1888), who is now most well-known for his nonsense poems, including The Owl and the Pussycat. Lear’s first publication, at the age of 19, was Illustrations of the Family of Psittacidae, or Parrots. This compendium of 42 lithographic plates of parrots, bound together as a limited edition book, was destined to become one of the most sought after (i.e. expensive) of all early bird books. In this volume, Lear illustrated and named a mysterious green parrot that was held at the London Zoo. No-one knew where the bird had come from, and it was another 55 years before Captain Fairchild of the New Zealand government steamer Stella solved the riddle, discovering that Lear’s ‘Platycercus unicolor Uniform Parrakeet’ came from the speck of land that is as far from London Zoo as it is possible to get – Antipodes Island!

The Antipodes Island parakeet is an unmistakable, uniformly green parakeet endemic to the subantarctic Antipodes Islands. It is much larger than the Reischek’s parakeets with which it shares this isolated island group. Leaves dominate its diet, but the species is noted for its habit of scavenging bird carcasses and broken eggs, and for killing and eating grey-backed storm petrels - joining the kea as New Zealand’s second occasionally predatory parrot.

The largest and most robust of all the Cyanoramphus parakeets, the Antipodes Island parakeet has uniformly green plumage that lacks the crown colouration typical of the rest of the genus. It has a very large bill and broad, rounded wings. Males are larger than females. Although capable of strong direct flight, Antipodes Island parakeets prefer to fly only short distances. They are inquisitive and often attracted to human activity.

Common throughout Antipodes Island, less frequent on smaller satellite islands, particularly in areas of tall dense tussocks and sedges, and where these occur on slopes and along streams.

Antipodes Island parakeets are common on Antipodes Island and Bollons Island, with smaller numbers on Archway, Windward and Leeward Islands. Total population is estimated between 1000 and 2000 birds. This increased variability (compared to previous estimates) has come about through monitoring resulting from recent survey effort for non-target impacts of mouse eradication. They are less common than the co-occurring Reischek’s parakeets.

The Antipodes Island parakeet has a stable population and is common within its 2,000 ha range. The population is protected by the islands’ isolated location and status as a strict Nature Reserve, which limits human visits. There is no evidence for hybridisation with the smaller Reischek’s parakeet in the wild. They were thought to compete with introduced house mice for seeds, but mice on Antipodes Island were subject to an eradication programme in the winter of 2016. The biggest threat to long-term survival is the possible arrival of mammalian predators.

Antipodes Island parakeets nest from October to March, using burrows up to one metre deep in fibrous peat or in tunnels (0.6 m long) within the dense matted bases of clumps of tall tussocks or ferns. The single nest found in the wild contained 5 eggs. Nest material was comprised of fern-scales and rootlets removed from the walls of the chamber. In captivity, the average clutch size is 5.6 eggs. Like all other Cyanoramphus parakeets, females are largely responsible for nest preparation, incubation, brooding and feeding of chicks until they are 10-14 days of age. During this period all her food is provided by her mate, who is much more assertive than other male Cyanoramphus parakeets. Prior to the chicks fledging, male birds take over most of the chick feeding, and are fed by their mates. Both parents feed fledglings until they are independent (a minimum of two weeks after fledging).

Although common, Antipodes Island parakeets are generally less abundant than Reischek’s parakeets in most habitats. They are sedentary, quiet and usually seen singly or as pairs or in small family groups. Significant differences in diet between the two parakeet species have been observed. Strong seasonal and annual dietary differences related to food availability are also apparent. Distinctive piles of chewed and crushed tussock and sedge leaves are readily observed in areas where these parakeets have been feeding.

This species is one of the few parrot species known to scavenge flesh from the carcasses of seabirds and furseals, and broken eggs. They are also actively hunt and prey on nesting grey-backed storm petrels. This behaviour occurs immediately before the parakeet’s breeding season, and is thought to be a seasonally reliable additional source of protein.

Antipodes Island parakeets are strong fliers but prefer to walk about and climb over vegetation, especially when feeding. If disturbed these parakeets become extremely furtive (particularly male birds) and will quickly disappear into the surrounding vegetation. Extensive use is made of the available labyrinth of seabird tunnels and runways and they often reappear some distance away in unexpected directions. Like all Cyanoramphus parakeets, they like to bathe regularly and spend significant periods sitting and preening in warm sheltered sites. Few territorial disputes are seen.

Antipodes Island parakeets display strong seasonal and interannual dietary preferences for leaves and seeds (especially those from Poa litorosa and Carex appressa) supplemented seasonally with flowers, seeds, berries, carrion and flesh from grey-backed storm petrels. Invertebrates are a minor component of the diet. The birds forage extensively on the ground, and are commonly seen foraging in the open over abandoned erect-crested penguin colonies during winter months.

Calls by captive pair (traffic and other parakeets in background)