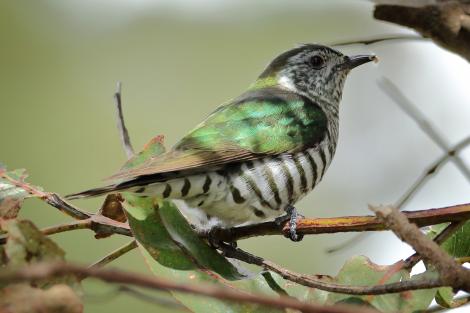 The shining cuckoo (shining bronze-cuckoo in Australia) is a summer migrant to New Zealand. It is common throughout New Zealand but it is small and cryptically-coloured and so is more often heard than seen. It has a distinctive whistling call. Two intriguing aspects of its life history are its brood-parasitic habits and the long annual trans-oceanic migration. The New Zealand subspecies breeds only in New Zealand (including Chatham Islands) but other subspecies breed in southern Australia, Vanuatu, New Caledonia and on Rennell and Bellona Islands (Solomon Islands).

The shining cuckoo is much the smaller of the two common cuckoos in New Zealand. It is iridescent dark green above, and white below with dark green transverse bands. The immature plumage is slightly duller, especially on the throat and chest, and with less distinct ventral barring. Sexes are alike.

Voice: the main call is a loud upwardly-slurred whistle repeated several times; the sequence usually ends with a downwardly-slurred whistle. Repeated downward-slurred calls are generally, perhaps always, due to several birds gathering together, and may be part of courtship behaviour.

Similar species: the shining cuckoo is similar in size and body-proportions to a sparrow-sized song-bird, but there are no other iridescent green birds in New Zealand.

Shining cuckoos are found in or near forest and scrub, and in farmed and urban areas – wherever their host species live.

To report sightings (or 'hearings') of shining cuckoos, to contribute to a study of their migration patterns, click here.

Shining cuckoos are common in season throughout mainland New Zealand, revealing their presence by their characteristic call.

Shining cuckoos are brood parasites, laying their eggs singly in nests of grey warblers (mainland) and Chatham Island warblers. Eggs are laid mostly in November, after which the adult cuckoos take no further part in breeding. Young cuckoos are dependent on their foster-parents for several weeks after fledging.

Shining cuckoos are small diurnal birds with a strong, slightly down-curved beak. They are usually first seen or heard in September or October when they rapidly spread to forested areas throughout the country. They migrate north again in autumn.  Despite their bright colouring, shining cuckoos are inconspicuous, usually staying among dense foliage. Their calls, while loud and easily recognisable, can be very difficult to track to source, with the bird often remaining concealed until put to flight. They are very prone to flying into windows, and for many New Zealanders their first or only awareness of the gorgeous iridescence of a shining cuckoo is when they find one stunned or dead beneath a large window. Foraging cuckoos can be quite approachable, especially when seeking kowhai moth caterpillars (Uresiphita polygonalis) in the open foliage of a kowhai tree. It is part of New Zealand bird lore that shining cuckoos are “often killed by cats among the cinerarias” while hunting the black hairy caterpillars of the magpie moth (Nyctemera annulata).

Gill, B.J. 1982. The grey warbler's care of nestlings: a comparison between unparasitised broods and those comprising a shining bronze-cuckoo. Emu 82: 177-181.

Fledgling following and importuning a grey warbler, which was feeding it. Chaffinch in background