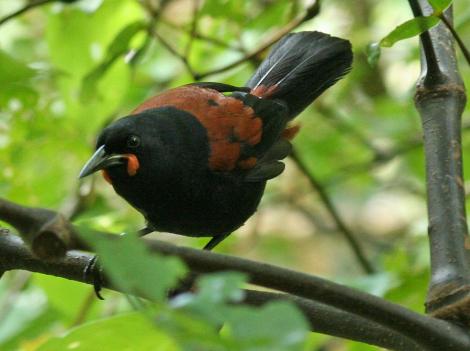 The South Island saddleback, along with its North Island sister species, is one of the most recognisable bird species in New Zealand due to its bold plumage markings, loud vocalisations and distinctive orange-red wattles. This endemic species is most famous for being saved from extinction in 1964, when 36 birds were translocated from rat-infested Big South Cape Island (off Stewart Island) to nearby Big and Kaimohu Islands. This was the first time that a rescue translocation had prevented a species from becoming extinct anywhere in the world. Descendents from the original translocated populations have since been introduced or reintroduced to numerous other sites (mainly offshore islands) and South Island saddlebacks are no longer at a high risk of extinction. Saddlebacks are in the endemic New Zealand ‘wattlebird’ family (Callaeidae), along with kokako and the extinct huia. The wattlebird family is thought to have close affinities to the stitchbird (Family Notiomystidae).

The South Island saddleback is a medium-sized songbird. Adults are black with a chestnut-coloured saddle across their back, while juveniles (commonly referred to as ‘jackbirds’) are entirely covered in chocolate brown plumage for their first year. Saddlebacks have distinctive fleshy, orange wattles on the sides of their mouths. The wattles of fledglings are small and indistinguishable from the gape; older birds generally have larger wattles than younger birds. Sexes are difficult to distinguish in the field except through differences in behaviour (i.e. males courtship feed their female partners, and only females incubate eggs). Males tend to have larger wattles and longer tarsus and wing lengths, and are heavier than females but the sexes can overlap in their measurements.

Similar species: North Island saddleback (which does not overlap in range) does not have a separate juvenile (jackbird) plumage, has a pale yellow band at the front edge of the saddle, and is slightly smaller with larger wattles, a slimmer bill, and different vocalisations. The female Eurasian blackbird is similar in size and plumage to a jackbird, but is more wary, and has a shorter beak and quite different body shape and posture.

Saddlebacks are most common in coastal forest and regenerating native forest, and occur at lower densities in mature tall native forest.

The most recent population estimate for South Island saddlebacks was 1265 individuals in 2003, but the population is now likely to exceed 2000 birds. Saddlebacks were historically widespread and abundant, but are now locally common only on offshore islands where introduced predators, especially ship rats and stoats, are absent.

South Island saddlebacks are extremely vulnerable to introduced mammalian predators such as ship rats and stoats due to their tendency to nest, forage and roost on or low to the ground. As a result, they are confined to sites where introduced predators are absent, primarily on offshore islands. Because of the increase in number of secure island populations, the species is now listed by the Department of Conservation as At Risk/Recovering.

The female South Island saddleback builds a cup-shaped nest only in the morning, usually in cavities of mature native trees such as southern rata. Nests may also be built in cavities under banks, in overturned roots of trees, inside derelict buildings, in the crown of tree-ferns, or in dense epiphytes and shrubs. Females appear to select cavities with properties that reduce thermal variation. Two pale eggs with light brown spots are incubated by the female only, for about 20 days. Both adults provision nestlings for the 25-27 days they are in the nest, and continue to feed them after fledging. South Island saddlebacks can breed during their first year, but typically do so only in low density populations.

South Island saddlebacks form long-term, monogamous pair-bonds and usually occupy the same territory for their entire lives. Pair-bonds are maintained by ‘bow-fan-warble’ and ‘archangel’ wing displays, as well as courtship feeding. Saddlebacks are poor fliers, and pairs are often seen noisily foraging together on the forest floor or quickly bounding between branches. Young, non-territorial individuals in high-density populations tend to forage together in small flocks of 2 to 4 individuals. Saddlebacks are frequently joined by other species, particularly yellowheads, native parakeets, brown creepers and fantails, to form multi-species feeding flocks during the non-breeding season. Throughout the year, fantails are often seen foraging alongside South Island saddlebacks, gleaning invertebrates that have been disturbed by the vigorously foraging saddlebacks.

South Island saddlebacks mainly forage on or low to the ground, and males tend to spend more time on the ground than females. Both sexes feed predominantly on invertebrates, using their long, sharp bill to pick through and toss aside leaf litter, pry apart and probe trees and rotting wood, and strip bark off of trees and tree-ferns. They also take fruit and nectar.

Pierre, J.P. 2001. Habitat use and foraging patterns of a reintroduced population of the South Island saddleback (Philesturnus carunculatus carunculatus), the first breeding season after release. Notornis 48: 63-71.

Rhodes, B.; O'Donnell, C.; Jamieson, I. 2009. Microclimate of natural cavity nests and its implications for a threatened secondary-cavity-nesting passerine of New Zealand, the South Island saddleback. Condor 111: 462-469.

A medium-sized black songbird with a chestnut-coloured saddle across the back, fleshy reddish-orange wattles at the base of the bill, and a pointed black bill. Juveniles have chocolate brown plumage for their first year and they have small wattles.