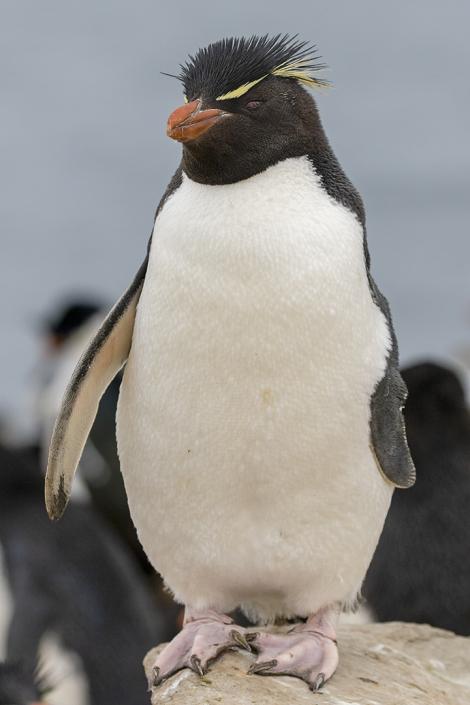 The western rockhopper penguin is a small crested penguin that can be distinguished from related species by the form of its crests, and the absence of pale skin at the base of the bill. The head, face, back and tail are black or dark grey, with a blue sheen immediately after moulting, and dull brown cast just before. The underparts are white with a sharp demarcation to black at the throat. The crest starts as a narrow, sulphur-yellow stripe about 1-2 cm above the gape. This expands into a wedge or triangle in front of the eye (cf. thin and parallel in eastern rockhopper), extending back horizontally and spreading out into long, drooping yellow plumes behind the eyes. The dangling plumes reach to the vicinity of the black-white demarcation line on the throat (cf. northern rockhopper penguin). The two yellow crests are joined across the hind-crown by a shorter, black occipital crest. The flippers are blue-black with a thin white trailing edge; the underside is white with a black tip and a thin grey leading edge. The orange-red bill is separated from the feathers by a thin strip of black skin. The eyes are bright red, and the feet and legs pink with black soles. Immature birds are generally smaller than adults and have a greyer throat and less well-developed crests.

Recorded initially from the Snares Islands, where a bird occupied an empty nest in a Snares crested penguin colony during the 1985-86 and 1986-87 penguin breeding seasons. At least two were present between November 1986 and March 1997, mainly among roosting Snares crested penguins on coastal rocks, with the last sighting of a single bird in February 2000. It is possible that all sightings were of the same two birds. The only mainland record was a bird at Victory Beach, Otago Peninsula, in February 2019.