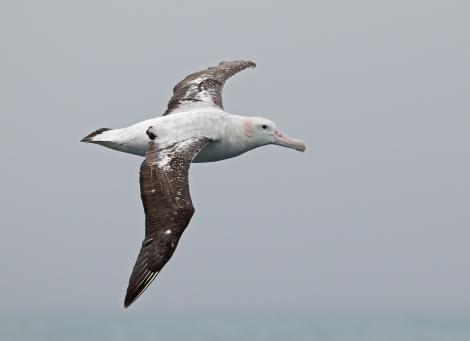 Great albatrosses have an impressive wingspan and slow gliding flight, which distinguishes them from other smaller groups (e.g. gulls and mollymawks). They are normally found offshore, but can be seen in southern New Zealand waters and northwards to Cook Strait, and in lower numbers further north. Care is needed to separate wandering and Antipodean albatrosses, as their plumage markings overlap almost completely. The most reliable distinguishing characteristics are the larger size, and especially the larger bill of the true wanderer.

The adult wandering albatross is a very large white bird with variable amounts of black on the enormous (3 m wingspan) wings and a pinkish-salmon coloured bill. Some adults have a pinkish stain behind the ears. The wandering albatross has numerous, graduated plumage phases, from chocolate brown juveniles with white faces and underwings through to mature males that are pure white apart from their black wing tips and trailing edge to the wing. At close range, even the whitest birds usually have fine dark vermiculations on their body feathers (not present in the royal albatrosses). Most wandering albatrosses (and Antipodean albatrosses) have upper wings that are either completely dark or have a large white patch in the centre of the inner wing that expands as the bird gets older. All but the whitest colour variations of wandering albatross are also seen in the Antipodean albatross, which is slightly smaller with a smaller bill, most apparent if the birds settle on the water together.

Voice: wandering albatrosses are mainly silent at sea. At breeding grounds they give a high-pitched trumpeting call, and also groans, rattles, and ‘puck’ sounds.

Wandering albatrosses breed on South Georgia and on Crozet, Kerguelen, Marion, Prince Edward, Heard and Macquarie Islands, and range throughout the Southern Ocean in latitudes from Antarctic to subtropical waters. Non-breeding birds from the Crozet Islands (and to a lesser extent other populations) frequent New Zealand waters. Non-breeding birds from the Crozet Islands (breeders in their sabbatical year, and pre-breeding birds) may spend extensive periods in the deep waters in both the Tasman Sea and the eastern waters of New Zealand from the subantarctic to latitudes around East Cape.

Wandering albatrosses breed outside of the New Zealand region, in the southern Indian and Atlantic Oceans and at Macquarie Island south-west of New Zealand. A global population of c. 8050 breeds biannually.

Threats to wandering albatrosses at breeding sites are few, as they breed mainly on sites with few or no predators. Threats in the marine environment consist principally of fisheries interactions, with population decreases linked to fishing mortality, particularly in longline fisheries. Recent studies have shown strong life-history consequences of inter-decadal changes in wind patterns, with stronger winds in the southern latitudes leading to reduced effort required for foraging by breeding birds, and positive population consequences.

Breeding occurs only outside of New Zealand and begins in the Austral spring, continuing for 8-10 months, depending on the site. Wandering albatrosses breed as monogamous pairs no more than once every two years, and have long-term pair bonds. The single large egg is laid in December or early January and is incubated by the parents in alternating shifts for about 11 weeks, with most hatching in March. The chick takes another 7-9 months to fledge; as the full breeding cycle takes 10-12 months, the adults then take a sabbatical year to complete their moult before attempting to breed again. Immature birds return to colonies when 6-10 years old, and typically do not start breeding until 11-15 years old.

Wandering albatrosses are solitary at sea, though may feed in flocks in association with fishing vessels.

The wandering albatross is essentially a scavenger, feeding on squid (especially) and marine fishes, and mainly within a few metres of the surface. Most prey is captured by surface seizing.

A very large white albatross with variable amounts of black on the wings, fine dark vermiculations on body feathers, very large pinkish-salmon bill, and in some adults a pinkish stain behind the ears. There are many graduated plumage phases from chocolate brown juveniles with white faces and underwings to pure white mature males with black wing tips and trailing edge to the wing.

Calls from pair at nest, with bill clapping