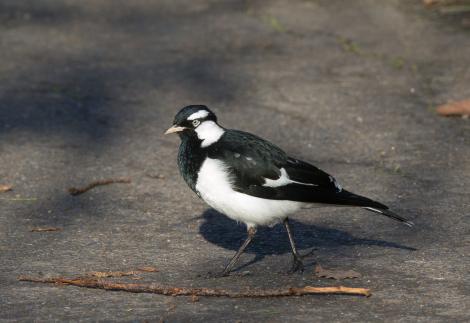 The magpie-lark is an easily-recognised and familiar Australian species, often seen walking on urban parks and sports-fields there. Although superficially similar to the much larger Australian magpie, the magpie-lark belongs to the monarch-flycatcher family, the other members of which are arboreal and much smaller. There is a single record from New Zealand.

The magpie-lark is a slender, black-and-white ground-dwelling songbird. It is about the size of a blackbird, but with longer legs and a more elongate body. The overall plumage pattern is black above and white below, with bold facial markings, and a prominent white panel in the middle of the folded wing. The tail appears black with a very narrow white tip, as the white base is concealed by the folded wings. Males have a bold white eye-brow and a large black bib extending from the chin to the upper breast. A large white patch on the lower cheek separates the bib from a black line through the eye. Females have a white forehead and chin surrounded by a black band extending from the crown, through the eye and down to the throat. Both sexes have a slender pale yellowish bill, white eyes, and dark legs and feet. Juveniles are browner, and have a white chin (like adult females) but a black forehead, and a white eyebrow (like adult males); juveniles also have a dark bill and black eyes. In flight the outer wing is black and the inner wing white (both above and below), the back is black, and the tail is mainly white with a bold black wedge extending from the tip towards the body (both above and below). The flight is strong and direct.

Voice: ringing, metallic piping call. The names pee-wee and peewit are renderings of part of the common call, given by both sexes singly or in duet.

Similar species: unlikely to be confused with any other species known from New Zealand. Although superficially similar to an Australian magpie, the magpie-lark is much smaller, and differs in having white underparts (magpies are dark underneath).

The magpie-lark is endemic to mainland Australia and Timor, with scattered records elsewhere in Indonesia and Papua New Guinea, plus Tasmania. It is common on Lord Howe Island (introduced in 1924, but also vagrant before then). In mainland Australia, it is widespread and common in open country, especially near water. It is often seen in urban parks and along roadsides. Some populations move north in winter, when they may congregate in flocks of more than a hundred (mainly immature) birds.

An adult male photographed at the mouth of Gorge River (75 km southwest of Haast) on 29 April 2008 is the sole accepted New Zealand vagrant record. Magpie-larks were introduced to multiple locations in the North Island during 1898-1900, but failed to establish.

Magpie-larks breed mainly as monogamous pairs with year-round pair bonds; most breeding is in spring and summer. A characteristic mud-cup nest (also containing straw and rootlets) about 15 cm in diameter is attached to a horizontal branch or occasionally manmade surface (e.g. the cross-beam of a power-pole). Both parents incubate the 3-4 pinkish eggs (28 x 21 mm), which takes about 18 days, followed by about 3 weeks of caring for the nestlings. Fledglings are fed for a further 3-4 weeks after leaving the nest. Multiple broods may be raised.

Magpie-larks are most often seen foraging on the ground as singles or pairs, walking with their heads moving back and forth with each stride. They form strong pair-bonds, reinforced by antiphonal singing (duetting) used to defend their territory. The song is accompanied by characteristic raising and lowering of the wings.

Magpie-larks are aggressive in defending their nest sites, driving off larger birds, and diving at human intruders.