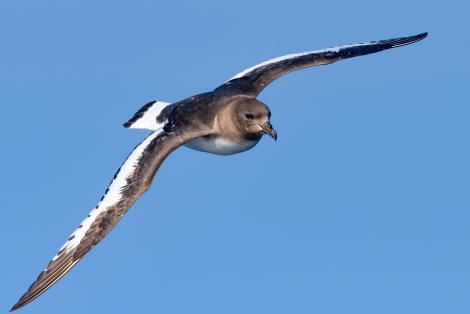 Antarctic petrels are boldly patterned brown-and-white seabirds that are rarely seen far from pack-ice and icebergs. They occasionally stray as far north as New Zealand in winter, where they are most likely to be found storm-wrecked on the North Island west coast and on Southland beaches. A remarkable influx to New Zealand waters in 1978 led to hundreds being seen around Fiordland and Stewart Island, and 77 were picked up dead on beaches. The next largest wreck of 19 birds occurred in 1991.

The Antarctic petrel is an unmistakable species, with bold, clean markings that are quite unlike those of any other petrel species. In fresh plumage the head, nape, back, rump, tail tip and leading half of the upperwings are chocolate brown, contrasting with the white trailing half of the wing and the mainly white tail. The underparts are white, apart from the brown throat and thin leading edge to the underwing. The brown feathers fade in the continuous Antarctic summer sun, so that birds are pale-brown-and-white by the end of the breeding season. Antarctic petrels glide on stiffly held wings, and flap less often than the speckled-backed Cape petrel, which is the only possible confusion species.

Antarctic petrels are one of the characteristic birds of the Antarctic pack-ice, occurring all around the continent, and especially in the Ross and Weddell Seas. They breed on ice-free rocky peaks and cliff faces on the Antarctic mainland, and on a few islands within the Antarctic icefields. Some breeding sites are on sea cliffs, while others are up to 350 km inland and 1600 m above sea level.  Antarctic petrels mainly feed among pack-ice, and often rest on pack-ice and icebergs. They occasionally range further north, reaching southern South America, South Africa, southern Australia, Macquarie Island and New Zealand, including Chatham and Snares Islands.

The first New Zealand record of an Antarctic petrel was one storm-wrecked in September 1973, followed by three in 1975 and one in 1977. These were followed by the phenomenal influx of September 1978, when 77 were found. Subsequent wrecks have occurred in 1987 (9 birds), 1991 (19), 1992 (8), 1995 (8) and 1999 (10), with most birds found August to October. Most Antarctic petrels have been found on west coast beaches between Wellington and Cape Reinga, with high encounter rates also on Southland beaches.

Antarctic petrel are highly gregarious, both in single-species and mixed-species flocks. They are attracted to ships, where they either fly high over the superstructure, or join the Cape petrels and Antarctic fulmars around the stern and under the bow. They often accompany minke and humpback whales. Flocks of up to 6000 formerly occurred around whaling vessels in Antarctic waters.

Antarctic petrels breed in dense colonies on cliff ledges and among rockfields, mainly on slopes kept free of snow by exposure to wind. Colonies up to 200,000 pairs can have densities greater than 1 nest per m2. Antarctic petrels often breed in mixed colonies with Antarctic fulmars, Cape petrels and snow petrels. Courting birds give a hen-like clucking, and throw their heads back until the top of the head almost touches their back. The single white egg (70 x 49 mm) is laid in a shallow, stone-lined bowl in late November or early December. Both parents share incubation (40-48 days) and chick-rearing (42-47 days). Eggs hatch in early January and chicks fledge in late February.

Antarctic petrels consume krill and other small crustaceans, small squid and fish obtained by surface-seizing, or plunge-diving up to 1.5 metres. They also take krill from the top of ice-floes when they are washed there by ship-wake.

A large petrel with chocolate brown head, nape, back, rump, tail tip and leading half of the upperwings contrasting the white trailing half of the wing and mainly white tail. The underparts are white apart from the brown throat and thin leading edge to the underwing, and the brown feathers fade in the continuous Antarctic summer sun so birds are pale-brown-and-white by the breeding season's end.