Geographical variation: Previously considered a subspecies of the Trindade petrel (Pt. arminjoniana) of the tropical Atlantic Ocean and Indian Ocean. Dark morph birds are considered indistinguishable from Henderson petrels (Pt. atrata), which until 1996 was included in Pt. heraldica. Both species breed sympatrically on Henderson Island in the eastern tropical Pacific. 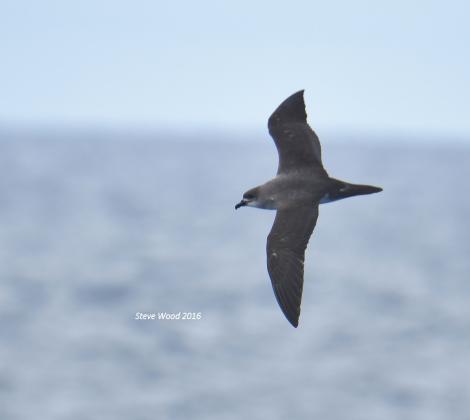 The Herald petrel was added to the New Zealand list in 2016, after a bird was photographed off the Herald Islets (Kermadec Islands) in March of that year. Coincidentally, both the bird and the islets were named after the same ship, HMS Herald, which undertook surveys in the south-west Pacific during 1852-61. The Herald petrel was described from two specimens collected on Chesterfield Reef, west of New Caledonia, probably in 1859. This was about 5 years after the vessel (under Captain Henry Mangles Denham) was at the Kermadec Islands. As ‘Herald’ is a proper noun, the bird’s name should always be capitilised.

The Herald petrel is medium-sized gadfly petrel, with variable plumage morphs ranging from almost entirely dark (grey-brown) to birds with grey-brown upperparts and white underparts, with a dark head. It is more lightly built and relatively longer-tailed than the otherwise similar (and even more variable) Kermadec petrel – although note that Herald petrels are never as pale as the ‘white-headed’ pale morph of the Kermadec petrel. Herald petrels of all morphs have dark primary shafts, and so the upper wing appears concolorous (cf. Kermadec petrel). All morphs of Herald petrel have a pale flash at the base of the primaries of the underwing, similar to Kermadec petrel (although the Herald petrel usually has more pale feathering extending on to the inner underwing). Pale morph and intermediate morph birds are the forms most often recorded at breeding sites in the south-west Pacific (and are therefore most likely to reach New Zealand). They have pale bellies and a more-or-less hooded appearance, with brownish plumage on the head and sides of the neck, often joined as a collar, but leaving a pale throat. Pale morph birds have largely white bases to undertail coverts and an indistinct collar, while intermediate morph birds are strongly hooded and typically have dark undertail coverts. Most birds have white on the lores or forehead, unlike the otherwise similar Phoenix petrel. There is no significant plumage variation with age or sex. The bill is black, the eye dark, and the legs and feet pink, with black outer toes and webs.

Similar species: the Herald petrel is difficult to identify due to its variable plumage, plus the similarity of some morphs to several other petrel species. It is very similar to the dark and intermediate morphs of the (also variable) Kermadec petrel. Paler birds are very similar to Phoenix petrels, which differ in having wholly dark foreheads, a more strongly hooded appearance, and darker underwings without a prominent flash at the base of the primaries. Kermadec petrels have pale primary shafts visible on the outer upperwing. Chatham Island taiko is slightly larger, has a darker and more prominent ‘hood’, whiter undertail coverts, and silvery underwing that often reflects light. Tahiti petrel is more heavily built with more massive bill (accentuated by a small head and long neck), darker brown plumage, and lacks the pale patch on throat. It also has longer, straighter wings, and flies with a more languid, leisurely style. Dark morph birds are indistinguishable from the Henderson petrel of the eastern tropical Pacific.

The sole New Zealand record was an intermediate morph bird seen and photographed off the Meyer Islets (Herald Islets, Kermadec Islands) on 29 Mar 2016.

Herald petrels exhibit typical gadfly petrel behaviour at sea, flying in high-banked arcs and glides, with wings angled forward and swept back at the carpal joint (cf. the more straight-winged Tahiti petrel). They visit breeding islands by day, nesting in a crevice or a surface scrape under trees or low vegetation, from near sea level to 1000 m. The single white egg is incubated by both parents, who also share care of the chick. The breeding season is variable with location; adults present at most colonies year-round (absent from Raine Island Nov-Jan).

A bird banded on Raine Island in 1984 was recovered on Round Island, Mauritius in 2006.

Little known, but includes squid (86% of 29 samples), insects (59%), fish (24%) and crustaceans (10%) taken from or near the sea surface. Tunicates also recorded as prey. Recorded feeding among Juan Fernandez petrels and wedge-tailed shearwaters.

A medium-sized polymorphic gadfly petrel that is very similar to Kermadec petrel both in appearance and in the range of plumages it occurs in. Herald petrel is slightly smaller, with a lighter build and a longer tail, and differs in having dark primary shafts (these are pale in Kermadec petrel). Intermediate morph Herald petrel is similar to Phoenix petrel, but differs in usually having pale lores