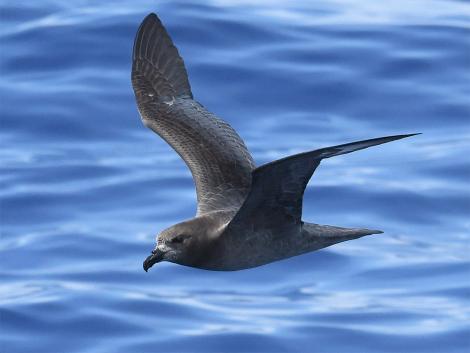 Norfolk Island was first settled by a party of convicts and soldiers in 1790. With provisions running low, their gardens not established and no sign of any ships, they were sustained by harvesting “Mount Pitt Birds” from the immense colony then on the island. From their life-saving properties these birds were also dubbed the 'Bird of Providence' and hence ‘providence petrel'. Surviving records suggest that up to 5000 birds were killed each night, not just the chicks but adults and eggs as well. This level of harvest continued until 1793 after which the settlement was self-sufficient. It is thought that over a million birds were taken. In 1795 they were still “in great numbers” but cats, rats, mice and pigs running wild on the island probably exterminated them soon after. They have survived on Lord Howe Island, restricted to the summit by pigs, but these have recently been eradicated so that population is expanding. A few pairs were discovered breeding on Phillip Island (Norfolk group) in 1985.

The providence petrel is a large, almost entirely dark greyish-brown gadfly petrel with a pale face, conspicuous white flashes on the underwing near the wingtips, and a long wedge-shaped tail. It has a brown head with a scaly, pale grey face, including the chin, while the rest of the plumage is more grey than brown. The pale patch on the underwing is formed by pale bases to the primaries and the first row of primary coverts. The bill is stout and black, the eye is dark, and the legs and feet are greyish-black.

Voice: providence petrels are silent at sea, but noisy in flight and on the ground at the breeding colony on Lord Howe Island, with the main flight call a screeching kir-rer-rer-kik-kik-kik.

Similar species: grey-faced petrel is similar but does not have a pale under-wing flash. Dark morph Kermadec petrel is smaller, lacks the grey face, and has prominent pale shafts to primaries forming a pale patch on top of the wing as well as below.

About 32,000 providence petrels breed on Lord Howe Island and there is a relict population of tens of pairs on Phillip Island, offshore from Norfolk Island. At sea they are pelagic and found in deep water from the continental shelf and beyond. During the breeding season (late February-November) many birds feed off eastern Australia from Fraser Island to south-eastern Tasmania. After breeding providence petrels migrate to the central north-eastern Pacific where they may reach the Bering Sea, and concentrate over the convergences of warm and cold currents.

There are five accepted records of providence petrels in New Zealand. The first two were dead birds washed ashore: Muriwai, Auckland (January 1921), and Dargaville (September 1984). About five were seen between Macauley and Curtis Islands, Kermadec Islands, in July 2002, one was seen over the shelf edge north-east of Cape Karikari, Northland, in May 2004 and three were seen off North Cape in May 2005.

Pigs and cats extirpated providence petrels from all or part of their range on Norfolk and Lord Howe Island but they can survive in the presence of rats. Cats and pigs have since been eradicated from Lord Howe Island, and there are plans to attempt rat eradication in 2018 or soon after.

Providence petrels are known to ingest floating plastic debris and some birds swallow hooks on long lines and drown but these do not appear to be major causes of mortality at present.

Providence petrels are mainly solitary at sea, but may gather into flocks of up to 50 birds. Like other gadfly petrels they have an easy flight with few wing beats, except in light winds, with long glides twisting into high arcs above the water.

Providence petrels mainly eat fish, but squid and crustaceans have also been recorded, and they sometimes feed on offal at fishing boats. Food is taken from the surface and by shallow dives up to 5 m deep.

Medway, D.G. 2002. History and causes of the extirpation of the providence petrel (Pterodroma solandri) on Norfolk Island. Notornis 49: 246-258.

A large dark greyish-brown gadfly petrel with a pale face, white flashes near the wingtips, a long wedge-shaped tail, and a brown head with a scaly pale grey face and chin. The bill is stout and black, the eye is dark, and the legs and feet are greyish-black.