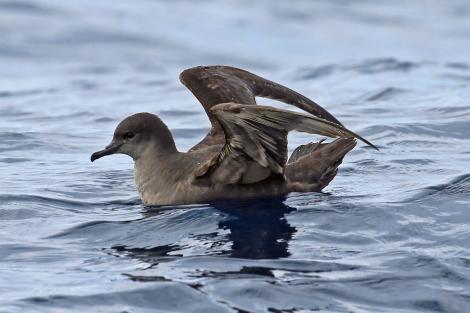 The short-tailed shearwater is probably the most numerous of the world's 37 shearwater species, with an estimated global population of 23 million birds. They breed on islands off southern Australia, mainly in Bass Strait and around Tasmania. Short-tailed shearwaters migrate annually, travelling further north than the related sooty shearwater, from the Aleutian Islands through Bering Strait into the Arctic Ocean. They return across the central Pacific, some migrating south along the west coast of North America. Birds fly around 15,000 km each way, a journey that takes six weeks in both directions. Short-tailed shearwaters are often seen at sea off mainland New Zealand from October to January and in May. Here, they are often mistaken for sooty shearwaters, which are slightly larger, with paler underwings.

The short-tailed shearwater is brown-black all over with dull grey underwings. It has long, pointed wings and a short, rounded tail. The lead-grey bill is relatively short for a shearwater (32 x 11 mm), and the legs and feet are dark grey. Short-tailed shearwaters have a compact physique, with a small head with a domed forehead, a short neck and a deep body (cf. the slimmer, more elongated wedge-tailed shearwater). The sexes are alike.

Voice: throaty kooka-rooka-rah calls are repeated rapidly, usually from the ground or in the burrow. These change to koo-roo-rah as the rate of calling increases and the pitch rises in energetic repetition. Short-tailed shearwaters are usually silent in flight.

Similar species: sooty shearwater is similar but slightly larger (44 cm) and heavier (800 g) and with a longer wingspan, longer bill (42 x 13 mm), a larger head with a flatter crown, and (usually) a silver-grey flash on the underwings. Dark morph wedge-tailed shearwater is longer (46 cm) but lighter (450 g), with a longer bill (38 x 13 mm), longer wedge-shaped tail, and pale flesh-coloured legs.

Short-tailed shearwaters breed only in Australia with most of the population in the south-east on islands in Bass Strait and around Tasmania. They breed in 285 colonies from September to April with 18 million birds arriving in Tasmania each year. There are 167 colonies in Tasmania, with the largest colony on Babel Island (3 million burrows). Colonies are usually on headlands and islands covered with tussocks and iceplant. During breeding, birds alternate between short foraging trips to local waters and long foraging trips of up to 17 days to the Polar Front (= Antarctic Convergence), where cold Antarctic waters meet the relatively warmer waters of the subantarctic, halfway between Tasmania and Antarctica.

Short-tailed shearwaters migrate annually, north to the Arctic region, with some passing through Bering Strait into the Arctic Ocean. Birds return across the central Pacific, some migrating south along the west coast of North America. Birds fly around 15,000 km each way, a journey that takes six weeks in each direction. They are often seen at sea off mainland New Zealand from October to January and in May. Stragglers have also reached the Kermadec, Chatham, Snares, and Campbell Islands in the New Zealand region, and nearby Macquarie Island.

The estimated total population of short-tailed shearwater is 23 million birds. Although the population trend is increasing in North America, the global population is suspected to be in decline due to ecosystem changes resulting from climate change. Early accounts from Australia suggest they were far more numerous in the eighteenth century with at least 100 million birds estimated by Matthew Flinders within a single flock in Bass Strait in 1798.

Although their population is massive, short-tailed shearwaters are still vulnerable to over-harvesting, habitat destruction and reductions in food availability. Feral pigs, cattle and sheep have destroyed whole colonies at some locations. Feral cats also find shearwater chicks easy prey. Soil erosion after fire can destroy suitable sites for burrowing. North Pacific commercial fisheries catch and drown up to 50,000 birds annually. About 200,000 chicks are harvested annually in Tasmania by commercial operators. At sea, short-tailed shearwaters sometimes eat plastic debris, mistaking it for food, which may contribute to deaths during migration. On average, short-tailed shearwaters live 15-19 years, with some as long as 38 years.

Short-tailed shearwater breeds in dense colonies mainly in areas of tussocks or iceplant, or on cliffs or bare ground. Birds arrive at the colonies in September-October, meet their mate, and prepare their burrow. Mating takes place inside the 1 m long burrow. Adult birds generally remain with the same mate for life, although around 25% of pairings break up after failing to produce young. In early November the pair leave the colony to feed at sea before returning in late November when the female lays a single large (71 x 47 mm) white egg. Egg-laying peaks 27-28 November. Incubation is shared and takes about 53 days. Eggs hatch in the third week of January; both parents feed the chick, which quickly puts on weight until it is nearly twice the weight of an adult. Adults depart from early April, leaving the young bird, which rapidly loses weight and acquires flight feathers. Two to three weeks after the parents leave, the juvenile birds start migration unassisted by the parents. The age at first breeding is about 5 years.

Short-tailed shearwaters are often seen in large rafts at sea off Tasmania during the breeding season. They feed in flocks of up to 20,000 birds, sometimes with other seabirds or with dolphins when around schooling fish. Colonies are visited after dark, and birds depart before dawn.

Short-tailed shearwaters take fish and other prey by plunging into the water and pursuing it underwater, up to 10 metres below the surface. They also seize prey at the surface and hydroplane, holding their head in the water while flying low over the surface, grabbing any prey within reach.

A large brown-black shearwater with long pointed wings, dull grey underwings, short rounded tail, relatively short lead-grey bill and dark grey legs and feet that project just beyond the tail in flight. Short-tailed shearwaters have a compact physique with a relatively small head with a domed forehead, a short neck and a deep body; the sexes are alike.

Pair in a burrow