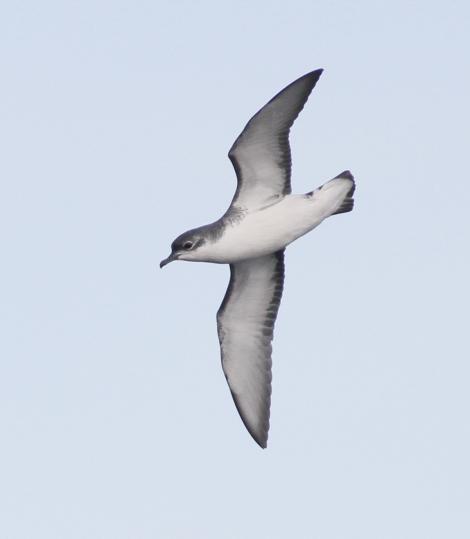 Understanding of the relationships of the small shearwaters has been considerably shaken up by genetic analyses. The subantarctic little shearwater has only recently been separated from the little shearwaters as a species in its own right. The two species are very closely related and probably similar in their ecology and behaviour. They are the smallest shearwaters in the New Zealand region. The subantarctic little shearwater breeds on the Antipodes and Chatham Islands, and also on islands in the South Atlantic Ocean and southern Indian Ocean. It ranges widely in the Southern Ocean. All of the breeding islands are remote and little is known about the biology of this species.

The subantarctic little shearwater is a small black-and-white shearwater with a long fine bill. It is black on the back and the upper wings, greyish in fresh plumage. The tips of the feathers on the upper wings are white so that there are very fine white stripes which may be visible in close views in fresh plumaged birds, but which erode with wear. Extensions of the white flank feathers form white sides to the rump. The underwing is white with a narrow dark margin and some greyish feathering in the wing pits (axillaries) may be visible. The border between the black and white on the face is below the eye, but there may be a pale extension behind the ears. The bill is blackish with blue grey sides, the legs and feet are blue with pale pinkish webs and the eye is black. Subantarctic little shearwaters fly with a typical small shearwater pattern, rapid shallow wing beats followed by a glide.

Similar species: among the species regularly present in the southern ocean, subantarctic little shearwaters are most similar to the much smaller diving petrels, which share their black-and-white plumage.  Diving petrels are more heavily built, proportionately shorter winged and have a faster, continuous wing beat. Around the New Zealand coast, fluttering and Hutton’s Shearwaters are similar but larger. Both species are to browner above with smudgy dark colouring on the sides of the neck and smudgy brownish colouring under the wing especially near the body and trailing edge. They also have less white on the sides of the rump.

At sea, subantarctic little shearwaters are mainly seen close to breeding colonies. Large numbers have been seen near the Bounty Islands, they are regularly seen at the Auckland Islands, plus there are records from the Snares and Solander Islands, and Little Mangere Island in the Chatham Islands. Young birds, and adults after breeding, disperse more widely through subantarctic waters, and reach as far as north as the southern North Island and possibly as far east as Chile, although most stay closer to home.

Tens of thousands of pairs of subantarctic little shearwaters breed on the outlying islands of the Antipodes group but they are absent from the main island. On the Chatham Islands, 100 or 150 pairs breed on the Star Keys and a few may breed on Little Mangere Island.

Subantarctic little shearwaters breed through the spring and summer with eggs laid between late August and early October and the young birds fly from the end of December to mid-February. They use short burrows, most no more than 1m long.

At sea subantarctic little shearwaters are seen singly or in loose flocks of up to 200 birds.

Not well known but small squid and krill have been recorded.

Shirihai, H. 2007. A complete guide to Antarctic wildlife. The birds and marine mammals of the Antarctic continent and the southern ocean. 2nd edn. A&C Black, London.

A small shearwater, dark above and white below, with the border on the face below the eye, black on the back and the upperwings (greyish in fresh plumage), white underwings with a narrow dark margin and some greyish feathering in the 'armpits'. The long thin bill is blackish with blue grey sides and the legs and feet are blue with pinkish webs.