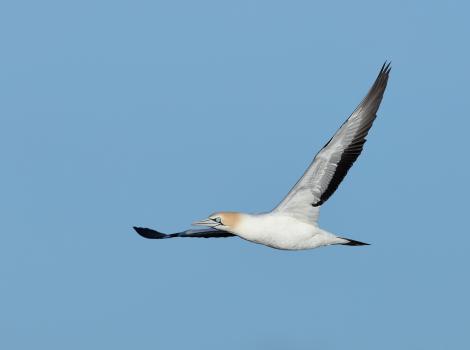 Gannets are large, predominantly white seabirds with pale orange-yellow heads, black flight feathers and a distinctive, elongate body shape that looks pointed at both ends. Their flight is also characteristic, with deep wristy flapping flight. The Cape gannet is an extremely rare vagrant to New Zealand waters, and is probably only reliably identified if it is seen closely on land, either as a bird visiting one of the breeding colonies of the similar-looking Australasian gannet, Morus serrator, or as a fresh corpse washed up on a beach.

Calls: similar to but deeper than Australasian gannet (about two-thirds of an octave lower in the Cape gannet).

Similar species: apart from the Australasian gannet, the only other species with which it might be confused is the masked booby, a smaller, similarly coloured species that has a white, not yellow-orange head, and a yellow, not bluish-grey bill. The other predominantly black-and-white seabirds are the much larger royal and wandering albatrosses, which have quite different wing shapes and flight.

The first New Zealand record of Cape gannet was an adult male observed at the Australasian gannet colony at Cape Kidnappers for five successive breeding seasons between 1997 and 2002, then again briefly at the start of the 2005 breeding season. During much of this time the bird was paired with a female Australasian gannet, hatching 3 chicks, 2 of which fledged successfully. One of these fledged birds, a male, returned to the colony 4 years later, in September 2005, where it was later seen incubating an egg. The second record was a bird among the gannet colony at the tip of Farewell Spit in December 2015. Vagrant birds have also been recorded from Australia on several occasions, with a pair fledging a chick at Point Danger, Portland, in February 2017.

A typical gannet, flying 20-30 m above the sea, periodically plunging down below the surface to pursue fish. Just before entering the water, the wings are swept back against the body, giving the birds the most streamlined shape possible for the dive, so that they look like javelins when hitting the water. As a result, the birds lose little or no speed initially on entering the water. Inflatable air sacs and a reinforced skull cushion the shock of impact.

A large white-bodied seabird with black primary and secondary wing feathers, pale orange-yellow head, and a wholly black tail. In general appearance, other than the tail pattern, it is similar to but slightly larger than the Australasian gannet.