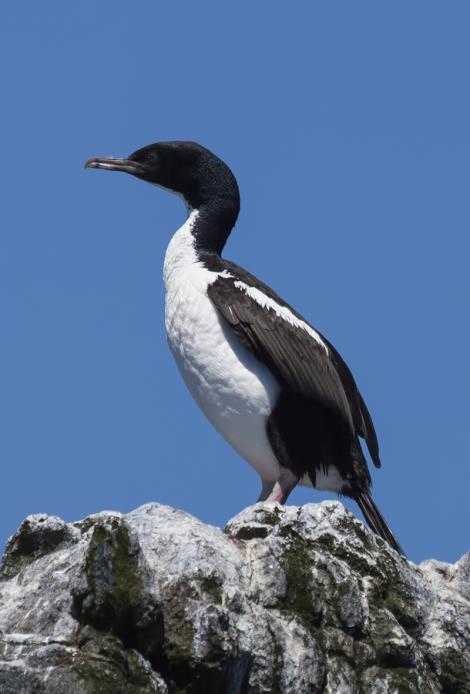 Stewart Island shags are large marine shags with variable plumage, found only in southern New Zealand. The pied morph has striking black-and-white plumage, whilst the bronze form appears dark brown, but is iridescent in the right lighting conditions. On Otago Harbour and in Foveaux Strait, Stewart Island shags are seen in ‘line astern’ squadrons heading to and from foraging grounds. The flocking behaviour, heavy build and flight close to the water is diagnostic. The habit of group foraging in murky water places Stewart Island shags at risk from set-net entanglement.

The Stewart Island shag is a large pink-footed shag of southern New Zealand. The pied morph has a dark head and white belly and throat, with white patches on the otherwise black wings. These appear as a white bar when the wings are folded. The back feathers are black with a blue sheen, and the tail is black. The bronze morph is entirely brownish-black, with a green sheen on the wings and blue sheen on the body. The bill is pale brown, pink or grey with a dark culmen ridge; the iris is brown. In breeding plumage both forms have orange caruncles above the base of the bill, and purplish facial skin (cf. yellow caruncles on king shags). Non-breeding birds are similar, but have duller facial skin colour and no crests. Juveniles are also dimorphic (i.e. pied or bronze) but are duller with pale facial skin and no caruncles. There is a marked cline in size from south to north, with Stewart Island birds small, and Otago birds large.

Voice: only reported at breeding colonies. When seeking a mate, males use a borr call. Males returning to the nest call with a soft eh-eh-eh; females remain silent. Chicks beg for food with a squeaky ah-whee-ah.

Similar species: around southern New Zealand, the pied morph may be confused with the similarly-sized pied shag, and the bronze morph may be confused with the black shag. Both pied and black shags have black feet and fly with an S-shaped neck. Pied shags have more white on their face, and lack white patches on their upperwings. Pied and black shags are more likely to perch in trees, whereas Stewart Island shags do not. Ways to separate pied morph birds from either king shag or Chatham Island shag are poorly understood. This has been problematic for extra-limital sightings of pied, pink-footed shags at Godley Head, Banks Peninsula, and at Kaikoura. Were they Stewart Island shags or New Zealand king shags?

Stewart Island shags occur from southern Stewart Island and outliers in the south, west as Te Wae Wae Bay, and north to the Waitaki River. There are two recent sightings of bronze morph birds at Lake Ellesmere. Numbers of nesting habitats in Otago have increased in recent years. It is not known whether this is an overall increase in numbers, or movement out of the southern part of the range.

Stewart Island shags are birds of coastal waters and harbours. They are recorded regularly in the middle of Foveaux Strait. They roost on headlands, small islands and on man-made structures.

Stewart Island shags are at risk from fishing interactions, particularly entanglement in set-nets, but occasionally by being shot (illegally) by fishers. Other threats include disturbance at nesting colonies. In Otago, all large successful breeding colonies are either islands or protected areas.

Stewart Island shags are colonial nesters in both small and large colonies, on rocky cliffs or bluffs. The pedestal nests are made of seaweed, sticks and grass cemented with guano. Each nest is just out of pecking reach of the next nest. Nest material is often stolen from unguarded nests. Colonies may persist for many years, or be suddenly abandoned. Breeding seasons may vary between years and between colonies. Stewart Island shag breeding behaviour and ecology has not been well studied. The 1-3 eggs are laid from September to November. Breeders are probably monogamous, and share incubation. Chicks are mainly fed in the afternoon, and beg for food with a squeaky call from one week old. They breed from three-years-old.

Stewart Island shags may roost in large flocks on headlands or man-made structures (e.g. the wharf at Oamaru). Flocks flying to or from feeding grounds fly in long lines close to the water. They have been recorded foraging up to 10 km off the Otago coast.

Stewart Island shags forage in groups, in water up to 30 m. They are able to successfully forage in murky water such as in the inner Otago Harbour. In such conditions the foraging strategy is based on ‘disturb and strike’ rather than ‘see and chase’. The diet is mainly seabed-dwelling fish (Otago Harbour 70% by weight) such as flounder and bullies. Invertebrates such as crabs, shrimps and polychaete worms are also taken. The diet varies seasonally, with fish making up more in spring (85% by weight) and less in winter (45% by weight).

A large pink-footed marine shag with two plumage morphs: dark brown "bronze" and black-and-white "pied". Birds in breeding condition have two orange caruncles at the base of the bill.