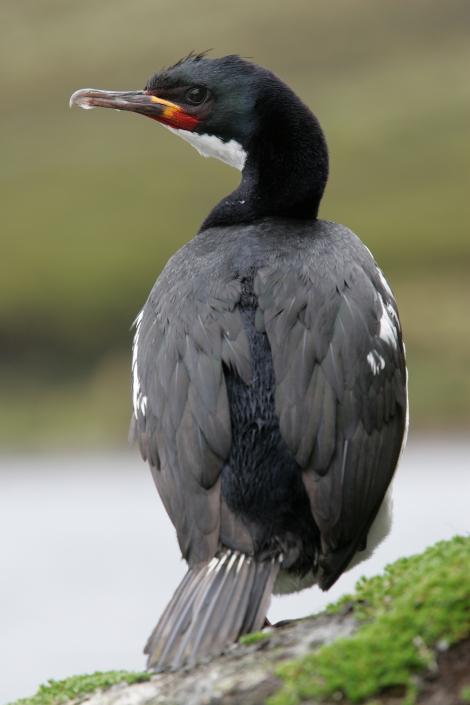 The Campbell Island shag is one of six pink-footed shag species endemic to New Zealand. It is endemic to Campbell Island and is the only shag species resident there. This species is classified as vulnerable by the IUCN because it has a very small breeding range which renders it susceptible to stochastic effects and human impacts. Population trends are unknown, but are assumed to be more or less stable. The Department of Conservation lists it as At Risk / Naturally Uncommon.

Campbell Island (Motu Ihupuku) is the main island of the Campbell Island group. Part of the New Zealand Subantarctic Islands World Heritage Area, the main island covers 112 square km of the group's 113 square km, and is surrounded by various stacks, rocks and islets, including Dent, Folly and Jacquemart Islands (the latter island is the southernmost in New Zealand). Lying 700 km south of Bluff, the islands are located between latitudes 52°32.4′S and longitudes 169°8.7′E.

The Campbell Island shag is a medium-sized, black-and-white marine shag. The black plumage on the head, neck and throat has a metallic green and blue sheen in sunlight, contrasting the white chin and underparts, and pale pink feet. During the breeding season it has a tall, black, recurved head crest and prominent dark purple to reddish-orange facial skin and throat pouch. It lacks the facial caruncles and blue eye-ring of the three northernmost pink-footed shag species, but has a prominent yellow line above the gape, and a yellow spot below it that grades to red. The iris is dark brown, and the long dark brown-grey bill grades to pale pink-orange at the hooked tip. White patches on the upper wings may be prominent, reduced or absent. Non-breeding adults lack a crest, and the black plumage fades to brown. Juveniles have dull brown plumage, dull purple-brown facial skin, and a dull yellow-orange throat pouch. Sexes are alike in plumage but differ in their calls and courtship behaviour. They fly with the head held below the body.

Voice: males bark during courtship displays. They are silent away from breeding colonies.

Similar species: none within its range as it is the only shag that is regularly present at Campbell Island (little shag and black shag occur as vagrants). The related, similar Auckland Island shag has continuous white from the chin and throat to the breast, a magenta-pink eye-ring, red facial skin, and a red-orange to purple throat pouch.

In 1975 the population of Campbell Island shags was estimated at c.2000 pairs and 8000 individual birds. However, the breeding season may be quite prolonged and staggered between colonies, and so this census may have underestimated the number of pairs.

The Campbell Island shag population is thought to be stable. Norway rats were eradicated from Campbell Island in 2001, and feral cats died out in the late 1980s, leaving the island group free of introduced predators. Subantarctic skuas take some shag eggs and chicks, but are unlikely to limit breeding success.

Campbell Island shag breeding ecology is very poorly known. They breed from November to February in colonies of up to 150 nests in large sea caves, and on alcoves and cliff ledges, often beneath overhanging rocks. Elaborate courtship displays by males includes penguin-walking, holding the body horizontally, pressing the breast down and rump up, swinging the head backwards and forwards, gargling, bouncing, tail-raising, bill-gaping, and crest-lowering. Mated birds greet one another by waving their wide-open bills back and forth. Campbell Island shags are probably monogamous. The 2 pale blue eggs (64 x 39 mm) are laid in a large flattened bowl of twigs and tussock. The nestlings are naked with black skin on hatching, later growing dark brown down.

Campbell Island shags can forage in large flocks of 30 to 100 birds, with one very large flock of 2000 birds recorded in Perseverance Harbour. When hunting, birds fan out in a line on the sea surface, dipping their heads in the water and beating the surface with their wings. They simultaneously jump into the air before diving to feed on small shoaling fish and marine invertebrates. After swimming a long distance underwater, birds reappear scattered across the surface and swim back towards each other to regroup before another dive. Foraging flocks are sometimes accompanied by Cape petrels, Antarctic terns and red-billed gulls.

A medium-sized, black-and-white marine shag with black plumage on the head and neck, and a dark throat with white chin patch. In breeding plumage it has a black head crest and a yellow line above the gape with a yellow spot below it that grades to red.