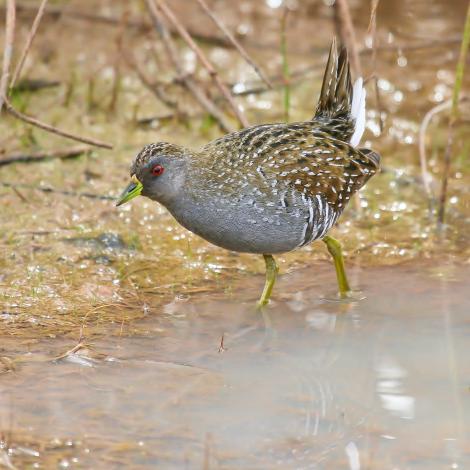 The Australian crake is a small wetland rail that is endemic to Australia. It is usually found on margins of wetlands where there is close surrounding cover, both in freshwater and estuarine habitats. It is not as shy as most crake species. There is a single record of an Australian crake being found in New Zealand (in 1871), presumably after having been wind-blown across the Tasman Sea. Australian crakes have very similar behaviour to the two resident New Zealand crake species, the marsh crake and spotless crake.

The Australian crake is a relatively small bird, similar in proportions to the two New Zealand crakes, but slightly larger. Its colouration is much like the marsh crake, with blue-grey cheeks, throat and breast, the crown, nape, back and upperwings are olive-brown streaked with black and finely spotted with white, and the belly is strongly barred black-and-white. It differs in having white undertail coverts, and in having an orange-red base to the olive green bill. The eyes are red and the legs olive-green. Juvenile birds have similar markings and colouration, but are plainer and duller with less contrast between pale and dark markings.

Similar species: marsh crake is smaller, has fewer white spots dorsally, and has the barring on the belly extending all the way to the undertail coverts (cf. the white undertail in Australian crake).

The Australian crake is endemic to Australia. Its main strongholds are the Murray and Darling River systems and the river systems feeding Lake Eyre. Coastal areas of New South Wales and southern Queensland inland to the Great Dividing Range along with north-eastern Tasmania also have reasonable populations, and there are many smaller populations scattered around the edges of the continent.

The only record of an Australian crake in New Zealand was a bird that was shot in the ‘Province of Auckland’ and was presented to the Colonial Museum by Walter Buller in 1871. The specimen remains in Te Papa (NMNZ.OR.004205).

Australian crakes are usually seen as singles, pairs or family groups, most often in early mornings or evenings. They walk at a slow steady stalking pace when foraging, twitching their tails as they walk. When running for cover, their tails are held erect. Australian crakes usually scurry for cover rather than fly, when threatened. Their flight is laboured with legs dangling when flying in short bursts, but they are capable flyers, moving longer distances at night.

Australian crakes occasionally cross creeks and waterways by swimming and may dive and peck at underwater vegetation, but they generally wade water edges or shallows when foraging.

Seeds, molluscs, snails and insects are obtained by probing or gleaning from the ground or vegetation. Australian crakes will submerge their heads to pick food from underwater vegetation and are known to break up larger food items by smashing them against the ground.

Hutton, F.W. 1871. Catalogue of the birds of New Zealand with diagnosis of species.

A small grey and brown rail with red eyes, olive-green legs, blue-grey cheeks, throat and breast, olive-brown crown, nape, back and upperwings streaked with black and finely spotted with white, and a belly strongly barred black-and-white. Distinguished from other crakes by its white undertail coverts and the orange-red base of the olive green bill.

Calls from a feeding group