Geographical variation: The Australian coot (Fulica atra australis) of Australia, New Guinea and New Zealand is a subspecies of the Eurasian coot, which is widespread in Europe, North Africa and Asia. 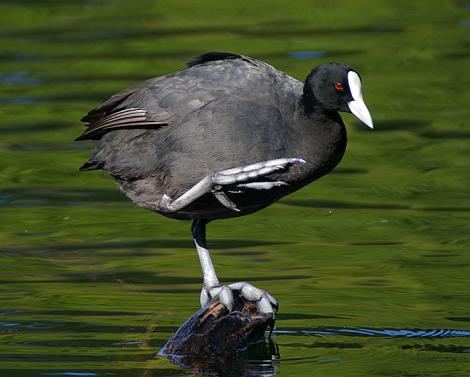 The Australian coot is a smart, dark-grey, duck-like waterbird, instantly recognisable from its bright white bill and frontal shield. Coots are related to gallinules – the branch of the rail family that includes pukeko and takahe. Out of the water, a coot’s stance is more like a small pukeko than a duck. But instead of the pukeko’s long thin toes, coots have broad fleshy lobes on their short toes, used to give propulsion when swimming. The Australian coot is a recent arrival in New Zealand, first recorded breeding here in 1958. Their colonisation partially fills the niche left vacant by the extinction of the New Zealand coot, which was widespread before the arrival of Maori.

Adult Australian coots are entirely slate-grey with a white bill and frontal shield. They have red eyes and large grey feet with lobed toes. Sexes are alike. Juvenile and immature birds have duller and paler colouring, with some pale grey on the chin and throat. They have brown eyes and smaller frontal shields. Coots are rarely seen in flight, where they differ from scaup in that their legs trail behind their tails in flight.

Similar species: New Zealand scaup have similar body size, shape, colouration and diving behaviour, but differ in having a blue-grey bill and no frontal shield, plus males have a yellow eye, and females often have white around the bill base (cf. blackish facial feathers in coots).

Australian coots are found throughout mainland New Zealand other than Northland, but there are few parts of the country where they are abundant. Coots are entirely aquatic, and there are large parts of the country that do not have their preferred freshwater lakes and ponds with submerged vegetation and reedy, grassy islands or edges.

Single coots, possibly the same bird, have occurred as vagrants on Stewart Island (December 2012) and the Snares Islands (April 2013). Coots have reached Macquarie Island Island at least twice, with at least 7 birds in May-October 1957, and one in June-October 1975.

The Australian coot is a subspecies of the Eurasian coot that self-introduced into New Zealand from Australia in the 20th century, and was first recorded breeding in New Zealand on Lake Hayes, Otago in 1958. There were about 2,000 coots estimated to be present in New Zealand in 2005.

Coots reached New Zealand on many occasions before they established, with at least 9 records from the South Island between 1875 (Lovells Flat, Otago) and 1957 (Heathcote River, Christchurch), before the first eggs and chicks were seen at Lake Hayes in November 1958. The first North Island record was at Lake Tutira, Hawkes Bay in 1954. There was an influx of coots in or before 1957, and they rapidly established as a breeding species.

As a self-introduced species, Australian coots are automatically covered by the Wildlife Act, and are fully protected. They are well-established in New Zealand, with no recognised threats.

The Australian coot breeds between September and March and is very territorial during this time. They breed as monogamous pairs, often raising 2 broods per year.  Three to 5 eggs, cream with dark spots, are laid in a floating nest of twigs and vegetation anchored to branches or reeds.  Both sexes incubate the eggs for about 22 days, and older young help feed and raise the new offspring.  The whole family group often remains together until the next spring.

Coots are the most aquatic members of the rail family, and are less secretive than most other rails. Although they do graze on short grass, they spend most of their time in the water, bobbing their heads as they swim and making short dives after a little forward jump. When alarmed they seek cover among emergent vegetation on the water rather than flying away. They appear to fly reluctantly from the water, pattering across the surface with a lot of splashing before finally taking off or settling in another area.  However, they are strong fliers frequently covering large distances, usually at night. These flights and changes of location do not appear to be seasonal.  Large flocks of coots may form after the breeding season.

An entirely slate-grey medium-sized rail with a white bill and frontal shield, red eyes and very large grey feet with large lobed toes. Juvenile and immature birds have duller and paler colouring with pale grey on the chin and throat, brown eyes and smaller frontal shields.

Group calling from under willows (chaffinch & silvereye in background)