Geographical variation: Up to eleven subspecies have been described; the subspecific identity of the birds recorded in New Zealand is unknown. 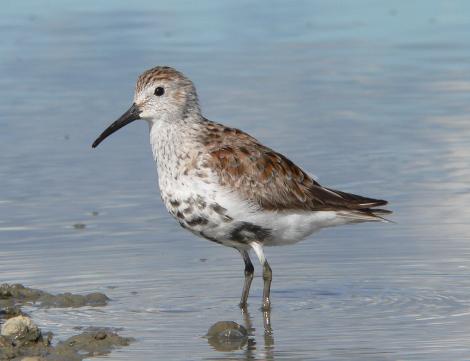 The dunlin is a small migratory wader that exhibits great variability in body and bill size, and plumage, leading to it being easily confused with a number of other small waders. In particular it is similar to the slightly larger curlew sandpiper, but with shorter legs and bill.

The dunlin is a very rare vagrant to New Zealand, with four accepted records.

The dunlin is a small short-legged wader with a relatively long slightly down-curved bill. The size and bill length can vary significantly between subspecies and individuals. Females have longer bills than males. Of subspecies likely to be encountered in New Zealand the American pacifica is the largest and has the longest bill, sakhalina, which breeds in Siberia and Alaska, actites, which breeds on northern Sakhalin, kistchinskii, which breeds in far eastern Russia, and articola, which breeds in north west Alaska, are intermediate in size and bill length between pacifica  and the European subspecies. In breeding plumage the black belly is very distinctive. The crown and upper back are ruddy, with the latter scaled, the breast is streaked pale grey, the lower back and upper wings are grey and the tip of the tail is black. There is a prominent broad white supercilium. The folded wings do not reach past the tail. In non-breeding plumage dunlin have a scaly pale grey-brown back and crown, white belly and face, and a white breast with faint grey streaking. In flight dunlin display white patches on either side of the otherwise dark upper tail, and a prominent white wingbar. Their typical feeding behaviour involves vigorous probing interspersed with rapid running.

Similar species: the bane of twitchers; dunlin can be, and has been, confused with almost every other small wader, from least sandpiper to curlew sandpiper. The black belly in breeding plumage is diagnostic. In non-breeding plumage the longer bill is sufficient to distinguish dunlin from stints.  The significantly shorter legs should be sufficient to distinguish dunlin from curlew sandpiper (Individuals of the subspecies pacifica are almost the same size as, and have a bill of similar length to, curlew sandpiper.) Dunlin also appears horizontal when feeding and roosting; in contrast to the more upright curlew sandpiper. The similar-sized white-rumped and Baird’s sandpipers have wings that extend beyond the tail. The former, with which dunlin has been known to interbreed, has a white rump. In non-breeding plumage dunlin is darker than sanderling, with less white in the wings, and has a longer bill.

The dunlin breeds in northern Russia, Europe, Greenland, Canada and Alaska, and migrates to the coasts of southern North America, south and west Europe, north and west Africa, the Middle East, China and Japan.

There are four accepted records of dunlin from New Zealand: Kaipara Harbour (February 1974), Manukau Harbour (June 1979, April-June 2006), and Miranda (March 1977). An earlier record from the Manukau Harbour (November 1969) is highly probable, and at least one additional record was never submitted for verification. All these birds had at least some dark feathers on their belly, greatly facilitating their identification. There are two confirmed records in Australia (both in Queensland).

Dunlin breed as monogamous pairs in coastal grassland, saltmarsh, upland moorland and Arctic tundra. The clutch of 4 eggs is laid in a scrape; incubation and chick-rearing are shared, and the young leave the nest soon after hatching. Dunlin have been recorded to have interbred with white-rumped sandpiper, sanderling and purple sandpiper (C. maritima).

Outside the breeding season, dunlin are typically found in the company of other waders, on muddy estuaries and coastlines.