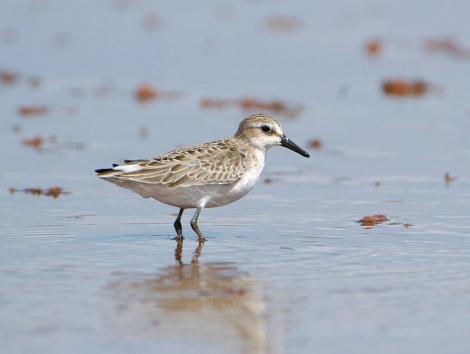 There is a single accepted record of the semipalmated sandpiper in New Zealand. This is somewhat surprising, as they are one of the most abundant waders in North America with an estimated population of over 2 million birds. Their rarity in New Zealand may be due to their migration routes; although they breed throughout northern North America, from Alaska to Labrador they migrate through the centre of the continent or along the Atlantic Seaboard, foregoing the Pacific Coast.

The semipalmated sandpiper is a nondescript small grey shorebird with a straight, black, blunt-tipped bill and black legs. During the non-breeding season its upper plumage is greyish, it has a grey upper breast, and white lower breast and belly. The breeding plumage is little different, although the scapular feathers develop dark centres. Semipalmated sandpiper never have the extensive rufous plumage that many of their congeners acquire when breeding.

Voice: semipalmated sandpiper flocks are often quite vocal- lots of cheets and giggles.

Similar species: in non-breeding plumage, they are very similar in appearance (and behaviour) to the western sandpiper, which normally has a longer, more downward curved bill with a more slender tip than the semipalmated sandpiper. Other black-legged stints (red-necked stint and little stint) are also very similar but have an overall browner hue and more slender bills.

Compared to other sandpipers, semipalmated sandpiper tend to moult relatively late, and so they may still have ragged plumage in October.

Semipalmated sandpipers breed primarily in northern North America (sub-Arctic and mid-Arctic) and migrate to non-breeding grounds along the coasts of northern and central South America.

The total population of semipalmated sandpipers is estimated at 2.2 million birds, and is estimated to be declining at 5% per annum.

The sole New Zealand record was a bird seen at Ahuriri Estuary, Napier, in January 1966.

During the day, semipalmated sandpipers are most likely found feeding on mudflats, however during high tide and at night they roost above the high tide line. They are quite gregarious and are often found in close association with other waders.

A small grey wader with a straight black blunt-tipped bill and black legs, which in non-breeding plumage has greyish upperparts, a grey upper breast, and a white lower breast and belly. The breeding plumage differs little, although the scapular feathers develop dark centres and there is no extensive rufous colouring.