Geographical variation: Five races recognised, with three ‘black-faced’ and more westerly breeding (pamierensis, atrifrons, schaferi), and two with white on their foreheads when breeding, that breed in eastern Siberia (mongolus and stegmanni). 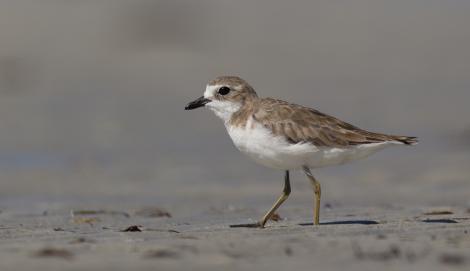 The two sand plovers (lesser and greater) are notoriously difficult birds to identify correctly. They are both between a banded dotterel and a New Zealand dotterel in size, but both are plain grey-brown above and white below in non-breeding plumage, compared to more mottled warm brown and often buff or reddish brown underparts of the New Zealand birds. Important characters to separate the two sand plovers include overall size, leg length, bill size and shape, and head shape. The lesser sand plover is the smaller in all parameters, with a more rounded head shape, and a more slender bill.

Most lesser sand plovers in New Zealand are birds in non-breeding plumage among non-breeding banded dotterels, where the visitors are the same size and structure as banded dotterels, but have more grey-and-white plumage tones compared to yellow-and-brown for banded dotterel. Non-breeding lesser sand plovers have essentially identical plumage to non-breeding greater sand plovers, being grey-brown above and white below with a dark partial breast band, and a mainly brown face with a slight pale eyebrow stripe. The underwing is mainly white, and the upperwing has a prominent white wingbar. Lesser sandplover in breeding plumage has a bright chestnut breast band separated from the white throat by a thin black line. Most have a small area of white on the forehead. The bill is short and dark, and the legs long and greenish brown.

Similar species: banded dotterel is similar in size but adults have a thin black band on the lower neck and a chestnut band across the upper breast, these being separated by a band of white. Juvenile banded dotterels are buff coloured cf. greyer sand plovers. New Zealand dotterel is larger and has orange-brown suffused underparts (when breeding) and browner upperparts. Greater sand plover in breeding plumage is larger but similarly coloured to lesser, but lacks the thin black line separating the chestnut breast band from the white throat.

The race stegmanni breeds in Chukotka, Kamchatka and the Commander Islands, while mongolus breeds inland in eastern Siberia and the Russian Far East. The other races occur across Central Asia to the eastern Mediterranean. [Despite this species often being referred to as ‘Mongolian dotterel’ or ‘Mongolian sand plover’ it is very uncommon in Mongolia.]

In breeding season, lesser sand plovers occur on coastal sand dunes (Commander Islands) and high mountain areas above the tree line. In the non-breeding season they are strictly coastal.

Most lesser sand plovers that reach New Zealand are of the paler-faced stegmanni / mongolus group, but there has been at least one black-faced atrifrons type bird. One or two birds occur in New Zealand most years. Records have been distributed from the Far North to Southland, and one on Chatham Island (December 1987). Most records are from Kaipara and Manukau Harbours.

About 50% of the East Asian-Australasian Flyway population (C.m. mongolus/stegmanni) stages in the Yellow Sea on northward migration – an area under severe threat from reclamation and pollution.

The nest is a shallow scrape in the ground, and usually 3 eggs are laid.

Lesser sand plovers feed on a variety of marine invertebrates during the non-breeding season. In Malaysia they favour polychaete worms and the siphons of bivalves; no New Zealand data.

Mauersberger, G. 1975. The first record of the Mongolian plover, Charadrius mongolus Pallas, for Mongolia. Bulletin of the British Ornithologists’ Club 95: 131-133.

A smallish plover which is grey-brown above and white below with a dark partial breast band in non-breeding plumage. The mainly brown face has slight pale eyebrow stripes, the underwing is mainly white, the upperwing has a prominent white wingbar, the short bill is dark, and the long legs are greenish-brown.