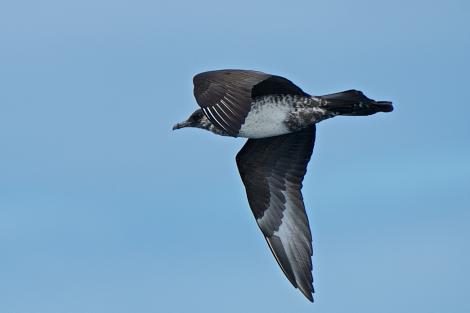 Skuas are strong-flying piratical seabirds allied to gulls. The pomarine skua is the largest of the three holarctic skua species that visit New Zealand. A few are recorded here during the austral summer before migrating to Arctic and subarctic breeding grounds. They pursue other seabirds forcing them to drop fish they have caught, allowing the skua to catch it in mid-air.

A stocky, gull-like bird with heavy, hooked bill, thick-set head and barrel-shaped body. The Pomarine skua has the same range of light to dark plumage variations as Arctic skua. Most are pale below. Breeding birds have diagnostic long, twisted, spoon-shaped tail-streamers up to 11 cm long with rounded tips. Adult non-breeding birds lack these or have shorter, less twisted tail-streamers. A slower, heavier, more purposeful flier than Arctic skua, with less falcon-like wing beats. Resembles subantarctic skua or southern black-backed gull and tends to chase larger birds than the Arctic skua. The sexes are alike. Pale adults have a brown back, mainly white underparts and dark wing feathers with a white "flash" near each end. The throat and neck are white with a yellowish tinge on the neck, contrasting with the black cap and cheeks. Dark adults are all dark brown. Intermediate adults are dark with paler underparts, head and neck. All have white wing "flashes", though these are less prominent on dark birds. Pale morph juveniles have a characteristic pale rump, absent in Arctic skua. Tail-streamers are lost during the austral summer which often makes adults difficult to separate from juveniles.

Similar species: Arctic skua and long-tailed skua. Arctic skua weighs around 25% less and is more falcon-like with a smaller, triangular looking head and smaller white wing "flashes". Long-tailed skua weighs around 50% less and is more tern-like with more buoyant flight. All three species have long tail-streamers when breeding but these are lost or very short outside the breeding season. All have dark, pale and intermediate forms with juvenile, immature and adult breeding and non-breeding plumage variations. There are 36 potential plumage variations to sort through when identifying birds at sea, hence the importance of noting differences in flight and behaviour.

Regular but uncommon visitor to New Zealand from December to April. Most New Zealand records are from Auckland, with fewer from Northland, south to Fouveaux Strait, and east to Chatham Islands. They are most often seen off sandy coastal beaches rather than in sheltered waters. Mainly pelagic outside the breeding season, sometimes joins Arctic skuas inshore to harrass terns and gulls. Often flies over land near the sea, including on migration.

World population is estimated at between 250,000 and 3 million individuals. In New Zealand there were single records of birds in each year between 1997 and 2000, three records each year in 2002 and 2003, one record at the Chatham Islands in 2004, no records between 2005 and 2008, and one record in 2009. These records probably underestimate the frequency at which pomarine skuas visit New Zealand waters.

Circumpolar breeder in Arctic and subarctic low-lying tundra and islands between June and August. Breeds in scattered colonies but less sociable than other skua species. Monogamous; 1-2 eggs, laid in a shallow plant-lined nest on the ground. Incubation shared. Chicks are dependent on both parents for food for two weeks after fledging, which occurs at 21-27 days. Migrates south during September to low latitudes of Pacific, Indian and Atlantic Oceans for the austral summer before returning to Arctic breeding grounds.

An opportunistic predator and scavenger that chases terns, gulls and other seabirds to pirate food from them. After laboured chases, usually flies low and direct between feeding flocks of terns or rests on the sea with head and tail held high. Often feeds singly but sometimes joins small flocks of Arctic skuas chasing terns and gulls. An exceptional group of 38 birds was recorded in the Tasman Sea, 100 km off the Waikato coast. Pomarine skua possibly arose as a result of hybridisation between great skua (Catharacta skua) and Arctic skua (Stercorarius parasiticus), and is placed in its own genus, Coprotheres, pending resolution of skua taxonomy.

Pirates food from gulls, terns, shearwaters and other seabirds up to the size of boobies and gannets. Able to kill small adult gulls by chasing and forcing them into the sea; catches own fish if necessary. Scavenges carrion and discarded waste from boats at sea. During the Arctic breeding season hunts and eats small mammals such as lemmings and other birds of the Arctic tundra up to the size of a gull.