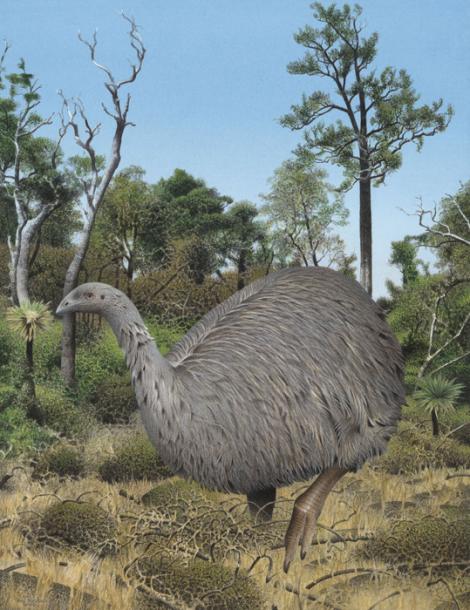 Moa were nine species of giant flightless endemic birds that belonged to six genera grouped into three different families. They evolved into a wide variety of sizes to become the largest terrestrial herbivores in prehistoric New Zealand. Together they represent the most diverse radiation of any New Zealand endemic bird group. Moa were unique among birds in lacking any wing bones. Like other flightless ratites, such as the New Zealand kiwi, Australian emu and Australo-Papuan cassowaries, they had no tail and lacked a keel on the sternum (the attachment point for wing muscles in other birds). All the moa species became extinct abruptly, 500-600 years ago, as a result of human overhunting. DNA study suggests that moa were more closely related to the flighted South American tinamou than to the kiwi.

The eastern moa was common in the eastern South Island. It was sufficiently distinct from other moa to be placed in its own genus. This species and the larger stout-legged moa were remarkable in having a very long elongated windpipe, which probably enabled them to make louder, more resonant calls than those of other moa. The windpipe included a loop up to one metre long that ran downwards inside the left side of the body, and across to the other side before it doubled back on itself to the breast and into the lungs. Modern day swan, crane and some spoonbill species also have elongated windpipes, and this explains their resonant, bugling calls. Only male eastern moa appear to have had an elongated windpipe, and so their calls may have had a role in sexual selection and competition for mates.

The eastern moa was a relatively short-legged, bulky, medium-sized moa. It had a relatively small head, and a delicate, pointed, slightly decurved bill. It had thick legs and very wide feet. The shaggy body feathers extended on to the upper leg, but were sparse on the neck, which had scaled skin with raised papillae. Adult females were 15-20% larger than adult males. Size increased towards the south of their range, and also during colder glacial periods.

The eastern moa lived in lowland forest and wetland habitats up to 200 m above sea level in the South Island. It was common in dunelands, grasslands, shrublands and mixed forest in the east from the Wairau River south to Southland and Central Otago, and inland to the foothills of the Southern Alps.

The main cause of extinction was overhunting by humans for food. The remains of moa are widespread in middens, along with specialised tools used to cut up carcasses and to work bones into tools. Middens dating from the thirteenth century, surveyed at the Wairau River bar in the Marlborough district, contained remains of more than 4,000 individual moa and large numbers of moa eggs. Eastern moa was the second most abundant species recorded at the site after stout-legged moa. Moa chicks may have been eaten by the introduced Polynesian dog (kuri). Burning of the eastern moa's forest and shrubland habitat is also likely to have reduced its numbers.

DNA evidence and egg shell and bone remains found at rock shelter sites in north and central Otago suggest that eastern moa once nested in rock shelters in this region. Plant remains found at nest sites strongly suggests that they built the nests in late spring-early summer. The plant remains found show that eastern moa clipped twigs 20-60 mm long and up to 4.7 mm wide from a range of locally available trees and shrubs. These twigs were used to build a nest consisting of a shallow bed of clipped twigs, coarse vegetation and stripped bark. The constrained space of rock shelters containing nest remains suggests that they bred as isolated pairs, rather than in colonies. Probably one or two eggs were laid per breeding season. The relatively large eggs (likely to have been about 180 x 132 mm) in comparison with body size suggest a long incubation, probably exceeding two months. The male is thought to have incubated the eggs, as is the case with most other ratites.

Its short, thick legs and very wide feet suggest that the eastern moa moved relatively slowly. The eastern moa and the larger stout-legged moa were remarkable in having a very long elongated windpipe, which probably enabled them to make louder calls that carried further than those of other moa species. Eastern moa appear to have been browsers.

Soft leaves and fruits rather than the fibrous material eaten by other moa species.

A relatively short-legged, medium-sized moa with a small head, pointed decurved bill, thick legs and very wide feet. Its shaggy body feathers extended on to the upper leg but were sparse on the scaly skin of the neck.