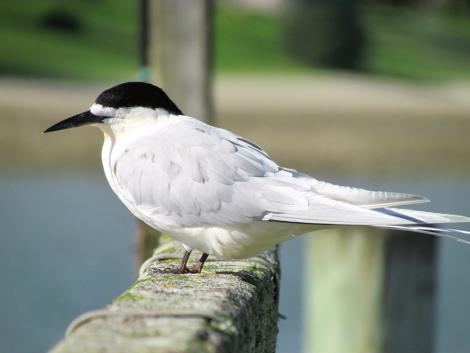 The white-fronted tern is the most common tern on the New Zealand coastline, at times occurring in flocks of many hundreds or even thousands of birds. It is mainly a marine species that is seldom found far from the coast. The name ‘white-fronted’ refers to the ‘frons’ or forehead, where a thin strip of white separates the black cap from the black bill. Most other ‘capped’ terns, including the black-fronted tern, have black caps that reach the bill when in breeding plumage. The scientific name striata refers to the finely-barred (striated) dorsal plumage of recently fledged white-fronted terns, as the original description and name was based on a juvenile bird painted by William Ellis, surgeon’s second mate on the Discovery, on Captain Cook’s third visit to New Zealand.

The white-fronted tern is a medium-sized, long-tailed sea tern that is common around New Zealand coasts. It is pale grey above and white below, with a black cap that is separated from the bill by a white band (or by an entirely white fore-crown in non-breeding plumage). The tail is white and forked; the length of the tail and depth of the fork decrease in size outside of the breeding season. The outer edge of the first primary has a narrow black or brownish-black band. In the breeding season, the black cap extends from the white frontal strip down to the back of neck, and both sexes may develop a pink flush to the underparts. Outside of the breeding season the cap recedes, leaving the forehead white. The eyelids, eyes and bill are black, and the legs vary from black to dull red-brown. Sexes are similar but females are slightly smaller. Immature birds are similar to non-breeding adults. They have the black nape streaked with white and the wing coverts and distinctive light brown mottling. Recently fledged birds have fine blackish barring (striations) over the back and wing coverts.

Voice: the main call is a high-pitched siet; a harsh keark or keeahk is uttered by birds defending their nests.

White-fronted terns are common all around New Zealand coasts. They occasionally forage up larger Canterbury rivers, but are seldom found far from the coast. Breeding occurs mainly on the coast of New Zealand and its outlying islands, Stewart, Chatham, and Auckland Islands, and off northeast Tasmania at Flinders and Cape Barren Islands. Most of the terns remain in New Zealand during the winter, but in autumn some white-fronted terns, mostly immatures, disperse to south-eastern Australia. These wintering terns are frequently seen on the coasts of New South Wales, Victoria and Queensland.

The New Zealand population has declined markedly over the last 40 years and is currently regarded as At Risk/Declining.

White-fronted terns often breed in ephemeral sites such as river beds, estuaries or river mouths that are subjected to frequent flooding. They nest in dense colonies which provide little protection against predation by introduced mammalian predators such as stoats, ferrets, cats, and rats. White-fronted terns often nest adjacent to red-billed gull colonies and some gulls, especially males, specialise in preying on the eggs and chicks of terns. Colonies of nesting terns are vulnerable to disturbance by people and their dogs.

Breeding usually occurs in large dense colonies on shingle river beds, sand dunes, stacks and cliffs. Sometimes a site will be used in successive seasons, but usually the birds change sites in successive years even if they were successful at a specific site the previous season. Terns tend to arrive at a prospective nesting location only a few days before laying, and there is a high degree of synchronisation of laying within a colony. The 1-3 (usually 1) eggs are laid in a slight depression on the bare ground without any nesting material. Often small stones are brought in to line the bottom of the nest. At Kaikoura in 1976, of 180 nests, 81% contained one egg and 19% two.

Pair-bonds are retained from one season to the next. Before laying, the male courtship-feeds the female, presenting small fish to her. Predators or humans entering a colony are repeatedly dived at.

White-fronted terns feed on small and larval fish at sea, in lagoons or up rivers. At sea it frequently feeds in shoaling fish swarms associated with kahawai, gulls and shearwaters. Flocks of white-fronted terns feeding over shoals of pelagic fish often attract the attention of fishers wishing to troll for kahawai, giving rise to the tern’s alternative name of kahawai bird. Feeding terns dive from 5-10 m above the surface. The forked tail enables the bird to manoeuvre extremely well, which is an advantage in foraging for small fish.

A medium-sized tern, pale grey above and white below, with a long white forked-tail, a black cap separated from the long pointed black bill by a white band, and a narrow dark band on the outer edge of the first primary. Breeding adults have a black cap that extends from the white frontal strip down to the back of neck; non-breeding adults have a reduced cap leaving the forehead white.