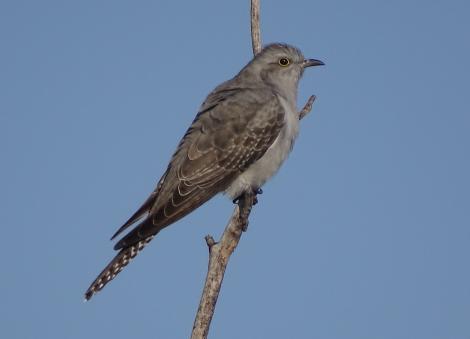 The pallid cuckoo is an Australian-breeding migratory cuckoo that has been recorded in New Zealand on six occasions. The first bird visited the same central Otago farm for three consecutive years during the non-breeding season (May-October), from 1939 to 1941. Several New Zealand sightings have been during the November-January breeding season, with the most recent being at Otakeho, south Taranaki in February 2021. Like most cuckoos, the pallid cuckoo is conspicuous by its loud, repeated calls during the breeding season, but the bird itself is often difficult to locate.

The pallid cuckoo is a medium-large cuckoo with the falcon-like profile characteristic of all Cuculus cuckoos. There are several quite different plumage stages or morphs, none of which have the heavily barred underparts of the similarly variable oriental cuckoo, and all showing bold white spots to the edge of the uppertail when at rest. Most adult males are pale grey, darker dorsally, with a dark stripe through the eye, a white spot on the nape and boldly barred black-and-white undersides to the wings and tail. A few males are darker grey, with all gradations in between. Females are more rufous in colour, and also vary between light and dark extremes, all with bold chestnut mottling on the dark upperparts, and some with a band of chestnut barring across the breast. All adults have the white spot on the nape and a narrow yellow eye-ring. Juveniles are boldly streaked and spotted with dark brown and white on the back, and are grey below, with buffy barring on the breast.

Voice: males give a loud ascending whistle that can vary, with a series of slowly rising and accelerating melodic notes, “too, too...too, too”. The female has a hoarse ascending “wh-wh weeya wh-wh weeya”.

The pallid cuckoo breeds in south-western and south-eastern Australia, migrating north after breeding to northern Australia,  Papua New Guinea, Indonesia, Timor-Leste, Moluccas and Lesser Sundas. It is common in Australia, but a vagrant to New Zealand, no breeding records here.

The pallid cuckoo mainly occurs in shrublands and lightly timbered country in Australia, including grasslands, farmland, and mallee bush. It is also found in urban parks and gardens, wherever its host species are present.

The pallid cuckoo breeds only in Australia, laying its eggs in nests of willie wagtails, honeyeaters, wood swallows, whistlers and flycatchers. Laying occurs from July to January in south-western Australia and August to November in south-eastern Australia. The female removes one of the host's eggs before replacing it with one of her own. Young pallid cuckoo chicks hatch before the chicks of the host, with the unhatched eggs being ejected.

Generally inconspicuous unless calling, pallid cuckoos sometimes perch in the open when foraging, e.g. on a fencepost, swooping down to the ground to catch insects and earthworms.

Pallid cuckoos are mainly insectivorous; snatching their prey from foliage and from the ground. Like many other cuckoo species, they specialise on species of hairy caterpillars, which other birds generally avoid.

A medium-large pale grey cuckoo with darker grey upperparts, dark eye-stripe, yellow eye-ring, short black decurved bill, white nape spot and boldly barred black-and-white undersides to the wings and tail. Females are more rufous with bold chestnut mottling on the dark upperparts; some have a band of chestnut barring across the breast.