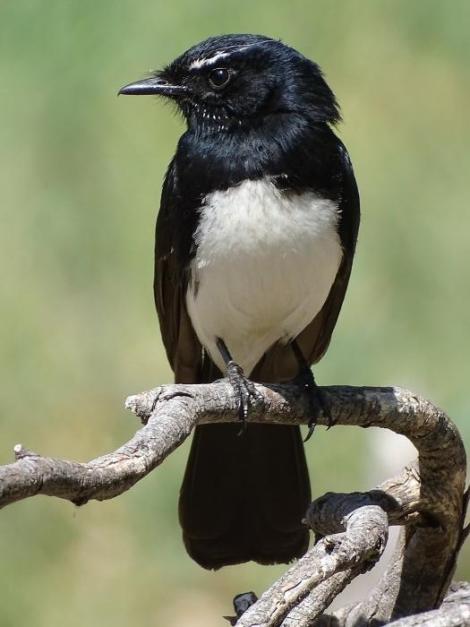 The willie wagtail is much like an oversized, noisier, black-and-white version of the New Zealand fantail, to which it is closely related. The willie wagtail is a widespread and familiar bird in Australia. Like the fantail, the willie wagtail wags its tail from side-to-side, unlike the unrelated “true” wagtails, which bob their tails up-and-down. With so many diverse Australian Aboriginal languages, and no linguistic continuity across the continent, there has been little enthusiasm to adopt Aboriginal names as the standard English name for many bird species (exceptions to this include kookaburras, budgerigar, brolga and galah). Instead, early explorers likened many birds that they saw in new territories to familiar birds from their homeland. So, small red-breasted birds in Australia became “robins”, although unrelated to the European Robin that spawned the comparison. In the late 1970s, in an attempt to provide nomenclatural consistency throughout the world, it was suggested by some members of the ornithological community to rename the willie wagtail as willie fantail, however it never caught on, so wagtail it remains. Perhaps, with a clean slate, the willie wagtail could be called “djidi-djidi” (pronounced chitty-chitty), or the “true” wagtails could be called bobtails!

A large black fantail with a sharply demarcated white belly. It has a prominent white eyebrow which varies in size and conspicuousness depending on the bird’s emotional state, sex or status. Like other fantails, it has prominent whiskers which protect the bird’s eyes from flying insects and provide information about potential prey’s location. The sexes are similar. As willie wagtails spend much time feeding on the ground, they have longer and stronger legs than other fantails.

Voice: the song, often heard at night, is variously transcribed as “sweet pretty creature” or “pretty little creature”. There are also rattling and territorial chittering calls.

Willie wagtails are very widespread in Australia. Some parts of the population are migratory whilst others are sedentary. It is an occasional visitor to Tasmania, although it has bred. The willie wagtail is mainly a bird of open habitats, and has adapted very successfully to human-altered environments such as gardens, parks and golf-courses. Water-courses, wetlands and other areas close to water are particularly favoured habitats. In the early 1920s, willie wagtails were introduced to Hawaii for insect control, but the venture was unsuccessful, and the population had died out by the late 1930s.

The only New Zealand record of willie wagtail is from Mangere Island in the Chatham Islands, in October 1999.

Fearless and aggressive, the willie wagtail will take on kookaburras, ravens, magpies and even birds as large as the wedge-tailed eagle in an effort to protect its territory. Humans, domestic cats and dogs and even snake-necked tortoises and tiger snakes can also expect to feel the wrath of the agitated willie wagtail. They use livestock both as mobile perches from which to conduct aerial forays, and as ploughs disturbing food as the cattle or sheep walks along. In winter they may congregate in flocks, but mostly are seen in pairs or singly. Willie wagtails line their cup nests with fibrous material, spider-webs and on occasion with animal hair such as cat, dog, goat and alpaca.

Willie wagtails feed almost exclusively on invertebrates, mainly insects, but have also been recorded eating seeds, bread and biscuit crumbs, and goldfish. They are active and restless, feeding mainly takes place on the ground, but willie wagtails will catch insects in flight, from foliage, and from tree-trunks and branches. Like New Zealand fantails, the willie wagtail conducts food forays by flitting out and back from a perch. Movement of the wagging tail is known to flush prey, as are movements of the wings. No New Zealand data.

A large black fantail with a white belly, a variable white eyebrow, prominent whiskers, short pointed black bill and long black legs. The sexes are similar and they have longer and stronger legs than other fantail species.