Geographical variation: At least 13 subspecies recognised, that occurring in New Zealand is either A. a. arvensis or A. a. scotica. 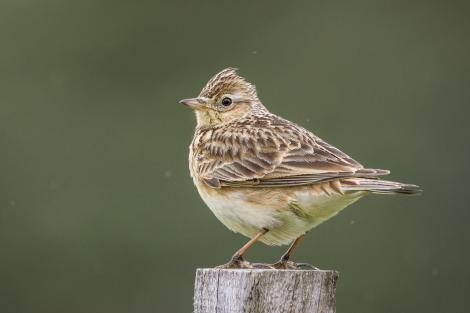 Eurasian skylarks are more often heard than seen. Their small size and streaked brown plumage make them difficult to see on the ground, but their vibrant aerial song quickly reveals their presence, a song that has inspired poets and musicians for centuries. Skylarks were introduced into New Zealand from England between 1864 and 1879, when more than 1000 birds were released. Birds from New Zealand were released in turn on the Hawaiian Islands in 1870, supplementing a population introduced there from England five years earlier.

The skylark is a small brown-streaked bird with off-white underparts, streaked breast and throat, and variegated brown upperparts in which the pale edges to the back, scapular, upper wing coverts, and flight feathers contrast with their darker centres. Juvenile birds have more pronounced pale edges to these feathers. Adults have a faint mask of pale feathers around and behind the eye, and a small streaked crest in the hind crown, raised when the birds are alert. The outer tail feathers are predominantly white, contrasting strongly with the rest of the tail, which is brown. The wings are broad, the brown flight feathers showing a narrow white trailing edge best seen from below when the bird is in flight. The bill is sturdy, horn-coloured at the tip, and yellow-brown at the base; the legs and feet are pink, with a long slightly curved hind toe.

Voice: a rich and prolonged sequence of chirps, trills and whistles, rising and falling rhythmically, given during an aerial display, 30-100 m overhead. Males sing a shorter version from elevated perches such as fence posts or bushes. Call is a liquid chirrup, given in level flight.

Similar species: New Zealand pipit, is similarly coloured and also occurs in open-country habitats, more usually on stonier and rougher ground. In general, pipits are more strongly streaked, with greater contrast between the dark centres and pale edges of the back and wing feathers. Pipits also have more prominent eye stripes; no crest; thinner, darker bills; often a more upright stance; and the habit of rhythmically wagging their tails up and down. Pipits typically walk or run in front of an observer, whereas skylarks crouch then fly. Note that pipit, yellowhammer, cirl bunting and chaffinch all have white outer tail feathers prominent in flight.

Skylarks are widespread in farmland, dune fields, tussock grasslands and other open habitats. During the 1999-2004 Bird Atlas survey, skylarks were recorded from just over 75 % of the country, being absent only from forested areas and the higher parts of the Southern Alps, and uncommon along the west coast of the South Island. At a finer scale, skylarks are more common on farms with less woody vegetation.

The skylark population size in New Zealand is not known, but it is a common species. The average breeding-season density on pastoral sheep farms on the Canterbury Plains was estimated at about 22 birds per km2, higher than on dairy (13 birds per km2) and mixed cropping arable farms (10 birds per km2) in the same region. Similar densities have been reported from the Chatham Islands (10 birds per km2). Reported densities on some sheep and beef farms in Otago are considerably lower (about 5 birds per km2).

Skylarks cause some damage in croplands by pecking newly-sown seeds and pulling up germinating seedlings, but early concerns about this have diminished with the shift from cereal cropping to pastoral farming.

Female skylarks build a neat grass-lined cup nest on the ground, often within or beneath an overhanging clump of grass or rush. Nesting occurs between September and January, during which time a pair may produce 2-3 clutches of up to five densely brown-speckled greyish eggs. The speckling is denser at the broad end of the egg, often forming a ring. Average clutch size in New Zealand is about 9% smaller than of birds breeding in their natural range in Europe, a feature perhaps selected for by a less strongly seasonal environment and longer breeding season locally. (A similar reduction in clutch size is apparent in 10 other introduced species here.) Only the female incubates the eggs, although both parents feed the nestlings, the male contributing up to half the food brought to the nest.

Skylark pairs are monogamous and strong territorial during the breeding season, but often gregarious outside it, especially at concentrated seed sources. In one European study, however, DNA fingerprinting of chicks revealed that in over a quarter of broods, and up to 20% of chicks, the female had mated with a male other than her partner. Between August and January, territorial males perform distinctive aerial displays in which a bird flies steeply upwards, singing as it goes, eventually levelling off 30-100 m above ground, at which point it is little more than a speck in the sky. There it hovers or circles slowly, singing continuously for 3-5 minutes (sometimes longer), before parachuting down with wings and tails held out stiffly, still singing, ending with a steep dive towards the ground for the last 15 m or so. The song is a rippling sequence of melodic notes, occasionally including phrases of other species’ songs and calls. One pair giving distraction displays near a nest containing young chicks gave the pit alarm calls of banded dotterel, itself nesting in the same area.

Skylarks mostly eat seeds, especially those of grasses but including cereals, clover and weeds; also invertebrates such as beetles, flies, spiders, bugs and larvae of various groups. Nestlings are fed initially on invertebrates. This largely granivorous diet contrasts with the New Zealand pipit, which feeds primarily on invertebrates.

A small brown and creamy-buff bird with off-white underparts, streaked breast and throat, variegated brown upperparts, a sturdy horn-coloured bill that is yellow-brown at the base, and pink legs and feet with a long slightly curved hind toe. Adults have a faint mask of pale feathers around and behind the eye, and a small streaked crest on the hind crown that is raised when alert.

Flight calls of an adult

Monotonous song given in flight