Geographical variation: Most New Zealand chukor came from India, with some birds from Iran released into Marlborough. It is presumed that the two variants hybridised. 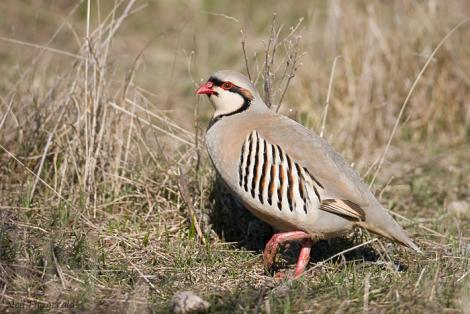 Chukor are boldly-marked gamebirds that in New Zealand are confined to South Island high country. They were introduced from Asia in the 1920s-1930s. Despite more than 80 years of captive-breeding and releases by acclimatisation societies, and more recently Fish & Game New Zealand, chukor are not numerous, and are declining in range.

The chukor is a medium-sized game bird, with a round squat body and sturdy legs. The dorsal surface is well camouflaged in ash grey, more rufous on the crown and shoulders. A prominent black band extends across the forehead, through the eye and down the side of the neck to join above the breast. The cheek and chin area enclosed by the black band is off-white. The flanks are prominently barred with black, white and chestnut. The dark eyes are surrounded in a red fleshy border. The bill is bright red and the legs are reddish-pink.

Similar species: the very similar red-legged partridge (Alectoris rufa) is still being bred in captivity and released into the wild, but has failed to establish any wild populations. It differs from the chukor in being browner dorsally, having more chestnut showing in the bars on the flanks, having a more prominent white eyebrow, and having a gorget of black speckling below the black neck band. California quail is smaller, has an erect crest, no barring on the flanks, and males have a black face.

Chukor are found in the South Island high country from Marlborough to Otago. They inhabit dry hill country, open shrubland and tussock lands with rock outcrops east of the Southern Alps, up to 2,000 metres. Chukor are occasionally seen at lower altitudes in Marlborough (Cape Campbell). The largest populations are in the Nelson Lakes, Seaward Kaikoura Range, McKenzie country and the ranges of Central Otago. North Island releases (mainly Hawke’s Bay and Bay of Plenty) unsuccessful.

No population estimates are available. Populations are widely scattered and fragmented, with many populations apparently in decline.

Chukor are not recognised as having any conservation or economic impacts, beyond supporting a limited hunt. They are protected outside the May to August shooting season. It is likely that their numbers are mainly controlled by harsh weather, and predation by introduced mustelids (ferrets and stoats) and native birds of prey (swamp harrier and New Zealand falcon).

Chukor form pairs in September, with the breeding season extending to January. The average clutch is 8 but clutches of up to 18 eggs being recorded. The nest is a simple scrape on the ground, hidden under the cover of tussocks or shrubs. Incubation is solely by the female and takes 3 weeks. The chicks leave the nest as soon as they are dry.

Young are cared for in family coveys accompanied by up to 10 adults. Outside the breeding season, chukor have been recorded as forming large coveys of 50 to 150 individuals.

Chukor are predominantly vegetarian, foraging for seeds and foliage plus a few invertebrates. Food is obtained by pecking at the ground and foliage, and by scratching in soil.

A medium-sized gamebird with a round body, reddish-pink legs, dark eyes with a red fleshy border, and a bright red bill. The upperparts are ash grey with rufous on the crown and shoulders, a prominent black band extends across the forehead, through the eye and down the side of the neck to the breast, and the flanks are barred with black, white and chestnut.

Chicks about a week old