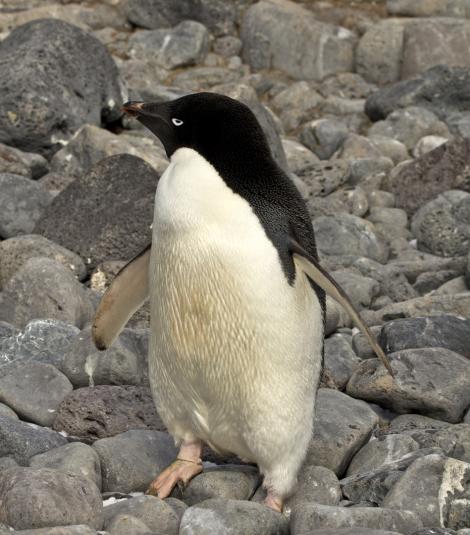 Adult Adelie penguins are readily recognised by their diagnostic white eye-ring and absence of other facial ornamentation, but the eye-ring can be absent in the white-chinned juveniles, which look quite different to the much photographed adults.

Adelie penguins are medium-sized, black-and-white penguins that are mainly confined to the sea-ice zone around Antarctica. Adults have a black head, face, chin and upper parts. They are distinguished from other penguins by a characteristic white eye-ring, and can also raise the feathers of the hind-crown, when displaying, to form a diagnostic angular occipital crest. Adelie penguins have a relatively long tail, and much of the bill is covered in feathering, making the exposed bill short and stumpy. Juveniles have dark blue back feathers when they leave the colonies, and further differ from adults in having the white eye-ring less prominent or absent, and having a prominent white chin, with a sharp demarcation line passing below the eye (cf. chinstrap penguin).

Voice: Adelie penguin colonies are very noisy places. The main calls given by adults are a loud, throbbing bray arr-rar-rar-rar-raah, often followed by a reverberating kug-gu-gu-gu-gaaaa. The contact call given on land, ice and sea is sharp bark aark.

Similar species: adult Adelie penguins are unmistakeable. White-chinned juveniles could be confused with chinstrap penguins (especially juveniles), which always have fully white cheeks, with the black-white demarcation line passing above the eye.

Adelie penguins have a circum-antarctic distribution, and are rarely recorded far from the Antarctic coast or sea-ice. They breed wherever ice-free Antarctic sites are accessible from the coast, often in close association with chinstrap or gentoo penguins, with each species typically having discrete colonies. Outside the breeding season, and even when moulting, Adelie penguins are mainly birds of the pack-ice zone, all around Antarctica.

The world population of Adelie penguins is estimated at 3.79 million pairs, around 34% of which live in the Ross Dependency south of New Zealand.

Several threats to Adelie penguins have been identified, including an increase in human visitors to Antarctica, resource extraction and installation of research stations on rare ice-free Antarctic sites used by penguins for nesting. Perhaps the greatest risk is the impact of climate change on the distribution of sea-ice around Antarctica, but the break-up of ice-shelves may expose further land suitable for breeding. Two recent studies reported decreases in the numbers of Adelie penguins breeding on the Antarctic Peninsula and South Orkney Islands (32% decline between 1983-84 and 2004-05), while they are apparently increasing in the Ross Sea sector.

Adelie penguins breed in large colonies in the Antarctic. Around 34% of the population is found in the Ross Dependency (around 1,290,000 pairs), with 250,000 breeding pairs at Cape Adare and 170,000 at Cape Crozier. There birds arrive at colonies in September-October and lay 2 eggs in a small depression that is lined with pebbles, which they collect (or steal from neighbouring nests). The eggs hatch after 30 – 43 days of shared incubation, after which chicks are brooded by a parent for about 2 weeks before joining together in crèches after about 2 weeks. The first coat of down is pale gray, though much darker on the head, with the second down a darker brown. The young birds fledge at 50-56 days and are sexually mature around 8 years of age.

Adelie penguins are highly gregarious, often gathering in roosting flocks on sea-ice, as well as being colonial breeders. Like other penguins, Adelie penguins spend most of their life at sea, feeding on krill and small fish, which they catch by pursuit-diving. Although they normally fish at depths less than 40 m, dives of up to 175 m have been recorded. There is some evidence that Adelie penguins feed more at night, though there is perpetual daylight at the height of the breeding season.

A medium-sized black-and-white penguin with a black head, face, chin and upper parts, white eye-rings and a relatively long tail. Much of the bill is covered in feathering, giving it a short and stumpy appearance; feathers on the hind-crown are raised during displays, forming an angular crest.

Adults and chicks in breeding colony

Calls from adults on colony, with chicks peeping