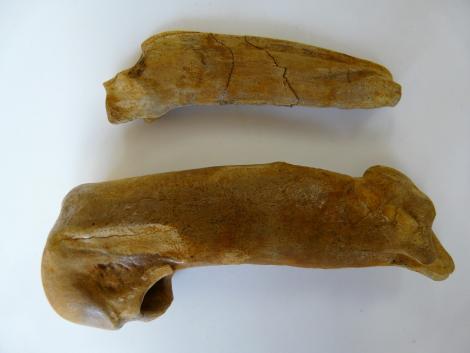 Brian Marples (1952) created the genus Platydyptes to include the wide-flippered penguin (named earlier by W.R.B. (Brook) Oliver), and this species. George Gaylord Simpson added a third species to the genus in 1971. The genus name is a combination of the Greek platys, broad and flat, and dyptes, diver, referring to the shape of the humerus.

Platydyptes penguins were large penguins of the Late Oligocene – Early Miocene (25-22 million years ago). All specimens referred to the genus were found in North Otago or South Canterbury. Amies’ penguin was the largest of the three, and was probably about the size of a king penguin, but with proportionately longer flippers.

Amies’ penguin was named from a humerus and associated radius from Hakataramea valley, South Canterbury. The holotype (OM C.50.61) is held in Otago Museum. Marples referred a second part radius (OM C.47.35) found near Duntroon, North Otago to the same species. Many specimens have been found subsequently, including an almost complete skeleton from Duntroon. The specimens are estimated to be 27.3-21.7 million-years-old.

The species name honours Mr A.C. Amies, a student at University of Otago, who found the first specimen at White Rocks, Duntroon in 1946, and was killed in Malaya shortly afterwards.