Other names: parasitic jaeger (jaeger is German for hunter) 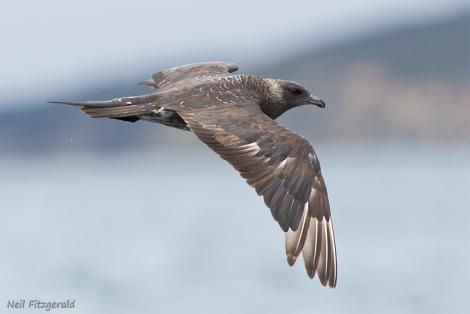 Skuas or jaegers are strong-flying piratical seabirds allied to gulls. The Arctic skua is the commonest of the three holarctic skua species that visit New Zealand during the austral summer before migrating north to Arctic and subarctic breeding grounds. They are often seen in New Zealand coastal waters, although it is unusual to see aggregations of more than 10 birds at once. A few immature birds over-winter. Arctic skuas are usually seen in coastal waters, harbours, sounds and estuaries. Pursues other seabirds forcing them to drop fish they have caught.

The Arctic skua is a medium-sized, graceful skua with long, pointed wings and a deep, rounded belly resembling a falcon in flight. It is the most abundant Arctic breeding skua, hence its common name. There are three adult plumage forms: dark, pale and intermediate, each with highly variable breeding, non-breeding, juvenile and immature plumages. 80% of birds in New Zealand are dark. Most adults have pale white panels or "flashes" near the end of their wings. Breeding birds have two long, thin tapering central tail-streamers that project up to 10.5 cm past the tail. Non-breeding adults have short, worn tail-streamers that only project a few centimetres past the tail. Juveniles and immatures lack tail-streamers. Dark adults are blackish-brown. Pale adults when breeding have a dark cap, white cheeks and throat, yellow-tinged nape, mainly white underparts and a dark back. Intermediate birds are dark blackish-brown with variable paler underparts, head and neck. Highly variable juveniles have barred underwings, a rusty brown body with darker mottling and barring, and paler streaked neck. Immatures develop adult plumage over several years with most resembling non-breeding adults. Immature pale birds are more heavily barred with a paler brown face and underparts and face, and a lightly barred rump and undertail. Sexes alike.

Similar species: two other holarctic skua species occur more rarely in New Zealand, with all three having highly variable plumage. Arctic skua is intermediate between the smaller long-tailed skua and larger pomarine skua. The slimmer, more tern-like long-tailed skua is most similar but with proportionally longer tail-streamers, a more prominent chest, and longer, narrower wings. The bulkier pomarine skua has a larger bill, head, neck and chest, with breeding birds having diagnostic twisted, spoon-shaped tail-streamers with rounded tips. Adult non-breeding pomarine skuas have shorter, less twisted tail-streamers. All three have dark, light and intermediate forms with juvenile, immature and adult breeding and non-breeding plumage morphs. There are 36 potential plumage variations to sort through when identifying skuas at sea. This makes it important to note differences in flight and behaviour. Arctic skua is most falcon-like with triangular looking head, flat chest and deeper, rounded belly. Long-tailed skua is more tern-like with more buoyant flight and relies more on surface feeding. Pomarine skua has slower, more direct flight with heavier wing beats, resembling a larger gull. The similar-sized Kermadec petrel also has dark, light and intermediate plumage forms, white wing flashes, and is thought to mimic foraging skuas. It may use its resemblance of skuas to parasitise other seabirds with more success than it would have otherwise.

Occurs around the mainland and Chatham Islands in coastal waters, harbours, sounds and estuaries from November to April. Most often recorded from Northland, Hauraki Gulf, Marlborough Sounds and Banks Peninsula.

World population estimated at between 500,000 and 10 million individuals. Commonly seen in New Zealand coastal waters, although it is unusual to see aggregations of more than 10 birds at once. Recorded from the Kermadec Islands (1964, 1979) and Antipodes Island (1926).

IUCN Red List classifies it as Not Threatened. In the UK a decline in numbers of breeding pairs was recorded 1986-2007 with reduced availability of fish during breeding thought to be the cause. Department of Conservation classifies it as a migrant that is secure overseas.

An opportunistic predator and scavenger that is aggressively tenacious in its pursuit of smaller terns or gulls until they disgorge their food which the skua catches while it falls. Usually feeds alone or in small flocks. Gatherings of up to 50 reported off northern North Island. White wing flashes thought to advertise parasitism and may act as signal between skuas not to parasitise each other. Long-distance migrant in loose flocks from Arctic and subarctic to temperate southern oceans. Loose flock of seven recorded south of Kermadec Islands flying south-west towards North Island, probably on migration. Most arrive October-November and depart March-April. Typically lives 12 years with one bird recorded 25 years old.

Arctic skua is the most parasitic of the holartic skuas. Mainly feeds by prolonged, twisting flight-pursuit of terns or gulls forcing them to drop fish they have caught, which the skua grabs as it falls. Also scavenges discarded waste from boats. During breeding season kills small mammals such as lemmings and small birds of the Arctic tundra.

Alarm calls and other calls from near the nest