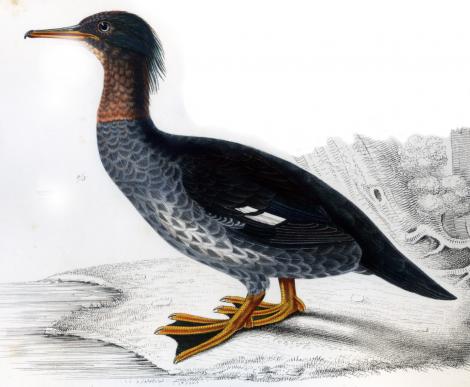 Mergansers (Subfamily: Merginae) are specialist fish-eating waterfowl. Five of the six extant species have broad distributions in cool temperate and Arctic regions of the Northern Hemisphere, where they primarily or exclusively inhabit lakes and rivers. The sixth, the now very rare Brazilian merganser (Mergus octosetaceus) once occurred more widely on Brazilian and Argentine rivers. A coastal and marine habitat has been ascribed to the New Zealand mergansers, which contrasts with the habitat of other mergansers notwithstanding the red-breasted merganser’s (M. serrator) seasonal use of sheltered coastal bays, coves and estuaries.

In addition to the Auckland Island merganser, there was a separate merganser species on the Chatham Islands (Mergus milleneri). Merganser fossils from mainland New Zealand cannot yet be assigned to either of the named species.

The former occurrence of mergansers in the New Zealand region is an as-yet unexplained bio-geographic oddity, and there is uncertainty about the relationships of these mergansers with all others.

The sexes of the Auckland Island merganser were similar to each other, but males were larger and had an obvious and elongated crest. The head and neck were dark brown, the entire upper body dark grey, and the breast and abdomen dull greyish-brown. The upper wings were slate grey, and the lower wing coverts were darker and banded white. The middle secondary flight feathers were white on the outer web and black on the inner web and tips, with the primary flight feathers and inner secondaries tending blackish. The eyes were dark brown, and the upper bill black but with its cutting edge and the lower mandible yellowish-orange; the legs and feet were orange. Immature birds were darker versions of the adults. Ducklings were dark brown-black above with yellowish-white underparts. Their bill, legs and feet were dark olive-brown.

Voice: “Quacking like a duck” is the only recorded description of the call of the Auckland Island merganser.

A total of 27 specimens are known to have been obtained from the Auckland Islands. Merganser bones found in natural deposits and Maori middens at sites on North, South, and Stewart Islands are possibly referable to the same species.

All bones unearthed have been at coastal or estuarine sites, except for Lake Poukawa in inland Hawkes Bay. Auckland Island specimens were obtained at the coastal edge at the heads of the island’s eastern inlets and bays. It is possible this species was also a resident of rivers and lakes in pre-human New Zealand.

The Auckland Island population was probably always tiny, possibly as few as 20-30 pairs.

Mergansers were extirpated following Polynesian settlement of New Zealand and Chatham Islands. The Auckland Island population would have been severely diminished by predation by pigs and cats following their release onto Auckland Island in the 1820s, and possibly also by being a food for early sealers at the island. The earnest collecting of specimens for museums, especially in the 1890s, led to the last specimen being seen, and collected, in January 1902, a mere 60 years after the merganser’s initial discovery.

No nests or eggs were ever recorded and only two broods of ducklings (both of 4 young) were observed. Both broods were seen in January and suggest a late summer nesting period akin to that of other Auckland Island waterfowl.

Auckland Island merganser pairs were probably strongly territorial, maintaining their territory and relationship year-round. The eastern inlets of Auckland Island and the bays within Carnley Harbour each have a small feeding stream and it is unlikely that more than one pair could have occupied any inlet and bay.

A specimen collected in 1901 had a 90 mm (“3.5 in”) koaro (Galaxias brevipinnis), a freshwater fish, in its bill. The gut contents of a preserved carcass at the Natural History Museum, UK (presumably from a specimen collected in 1901 or 1902) comprised “macerated fish bones, mandibles of an errant polychaete and an unidentified gastropod”. Analyses of stable isotope content of bones indicates that mergansers at the Auckland Islands fed in both marine and fresh waters.

A large merganser with a dark brown head and neck, dark grey upper body, dull greyish-brown breast and abdomen, dark brown eyes, a long slender serrated yellowish-orange bill with black on the upper mandible, and orange legs and feet. The upper wings were slate grey, and the lower wing coverts were darker and banded white; males were larger with an elongated crest.