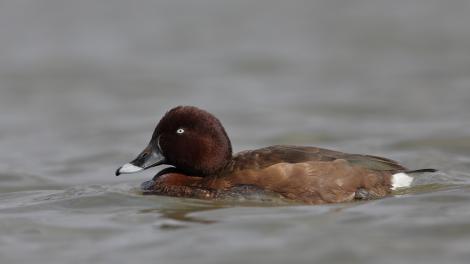 The Australian white-eyed duck is now considered a vagrant in New Zealand, but it apparently had a breeding population here until the late 1800s. Maori were aware of it, giving it the name karakahia. It now breeds only in Australia, but regularly ranges to the north, including to Indonesia (one breeding record), New Guinea, Vanuatu, New Caledonia and Norfolk Island. It is Australia’s only true diving duck and exhibits similar behaviour to the New Zealand scaup.

Both male and female Australian white-eyed ducks are uniform chocolate-brown with rufous flanks, an irregular white patch on the belly and a white undertail. The male has a distinctive white eye and a prominent white bar across the upper mandible of its bill. This white band is more subdued in the female, which has brown eyes. In flight, the white primary and secondary wing feathers produce a similar broad white wing trailing edge to the wing as seen in New Zealand scaup, but extending right to the body. Compared to a mallard, the Australian white-eyed duck is small with a rotund body that is adapted for deep diving. The bill is comparatively short with a black hook at the tip of the upper mandible.

Voice: generally silent, but when breeding the male has a wheezy whistle, and the female a harsh rattle.

Similar species: New Zealand scaup are of similar structure and behaviour but are smaller, darker and more compact, with dark undertail coverts. Scaup lack a pale saddle on the bill, and males have a yellow iris. In flight, the white wing bar on scaup stops short of the body.

The Australian white-eyed duck is a diving duck, and prefers large expanses of deep still water where it can dive for the water weeds and aquatic invertebrates that constitute its diet. It is mainly found in the south-east of Australia, particularly along the Murray-Darling watershed. It can make deep dives of longer than a minutes’ duration. Australian white-eyed ducks are very proficient swimmers, propelled by powerful webbed feet placed far back on their body. The positioning of the legs makes it difficult for this duck to walk or perch. They spend nearly their whole life on freshwater, and are rarely seen on land or in coastal marine areas.

Australian white-eyed ducks tend to stay in areas of favourable habitat, but when drought threatens, they will migrate great distances. This urge to find water is one of the reasons for their “vagrant” distribution throughout Indonesia, and Oceania. When conditions are favourable in Australia, such as high rainfall years that create large wetlands and inland lakes, the Australian white-eyed duck is less nomadic and they breed in large numbers.

Australian white-eyed ducks are extremely aquatic, including courting and mating on the water (during which the female becomes fully submerged). They have a strong pair bond, with the male calling loudly to protect his territory and mate. The 9-13 whitish eggs are laid in a shallow bowl of sedge or grass leaves, sparsely lined with down, among dense vegetation near open water. The female incubates unaided, which takes 25-30 days.

In Australia, white-eyed ducks dive for water weeds and invertebrates. They will also dabble for food items in shallow water and mud. There are no New Zealand data.

Males then females (many species including reed warbler in background)