Geographical variation: Two subspecies: Charadrius b. bicinctus on the main islands and Chatham Islands, and the larger C. b. exilis on the Auckland Islands. 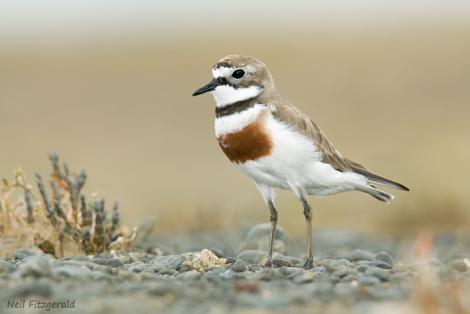 The banded dotterel is the most common small plover of New Zealand seashores, estuaries and riverbeds. Although their plumage varies seasonally, they are readily identified by their brown upperparts and complete or partial chestnut breast band, the latter being quite striking in breeding plumage. Like other typical plovers, the body is held erect and they have a characteristic run-stop-peck-run foraging behaviour in their pursuit of small invertebrates.

Inland-breeding birds undertake a post-breeding migration to estuaries and other coastal wetlands the length of New Zealand and many also travel to Tasmania and south-east mainland Australia in an unusual east-west migration.

The banded dotterel is a small, compact plover, plain brown above and mainly white below. In breeding plumage from about June to December the male has a broad chestnut breast band and a narrow black neck band above this. Both of these bands are present but duller in the female. Juveniles may appear greyer than adults, often with a mottled appearance due to pale narrow edging to their dorsal feathers. The larger Auckland Island subspecies has longer legs, and has the breast bands duller and flecked with white.

Voice: flight calls are an unobtrusive chip call sometimes repeated, and sounding like continuous chattering when a sizeable flock is flying by. Territorial birds are much more vocal giving a “chee-aree-aree” call, with males often puffing out the breast feathers at the same time.

Similar species: banded dotterels sometimes associate with the similar-sized wrybill which is plain grey above, and New Zealand dotterels which are larger and greyer plovers. A rare vagrant to New Zealand, the lesser sand plover, is easily confused with the banded dotterel when not in breeding plumage. It is a greyer above (cf. brown on banded dotterel) and is whiter on the face, with a white forehead and eye-brow contrasting with a dark eyepatch. Dark shoulder tabs project onto the upper breast, and may join as a dark breast band.

In the breeding season banded dotterels are widespread on mainland New Zealand from Spirits Bay (Far North) to Mason Bay (Stewart Island), plus some offshore and outlying islands south to Auckland Islands and east to the Chatham Islands. The populations on the Auckland and Chatham Islands have only local movements, whereas mainland birds often undertake migrations of several hundreds of kilometres. The longest banded dotterel migrations are those undertaken by birds of the riverbeds and outwash fans of the South Island high country, most of which have an unusual east-west migration of 1600 km or more to Tasmania and south-eastern mainland Australia for “winter”, typically in the period late summer to mid winter. Birds that breed in lowland South Island and central New Zealand rivers generally move north to “winter” at harbours and estuaries of the northern North Island. Others that breed at coastal lagoons and beaches may move only a few kilometres. Vagrant birds regularly reach Norfolk Island, and have also been recorded at the Kermadec Islands, New Caledonia, Vanuatu and Fiji. A few Auckland Island banded dotterels have been seen on Campbell Island.

Typical breeding habitat for banded dotterels comprises lightly vegetated riverbeds, outwash fans, herbfields, beaches and farmland. The composition of vegetation varies regionally and particularly with altitude. For example, high altitude riverbeds are favoured if there is plentiful cover of prostrate shrubs of genera such as Raoulia, Pimelea, Muehlenbeckia and Coprosma, but nearby sites of bare gravels are less often utilised. In lowland sites lightly grassed habitat pasture or even bare gravels may be utilised.

The total population is in the order of 50,000 birds and is declining. Dotterels have disappeared from many sites throughout New Zealand, including some where the habitat has changed little in recent decades. The key factors in the decline are likely to be introduced mammalian predators which prey on most eggs that are laid and many chicks, juveniles and adults. Invasive predators known to seriously impact on banded dotterels are feral cats, mustelids (ferrets, stoats and weasels), rats and hedgehogs. Habitat loss and human activities has also contributed to displacement of birds at some sites, particularly breeding sites.

Banded dotterel pairs are solitary and territorial, but there can be high concentrations of birds in good habitat. Birds begin to arrive on the breeding grounds and set up territories in July (later at high altitude). First eggs are laid in August to early November, in shallow scrapes in gravel, sand or soil, usually lined with tiny stones, occasionally shell. The clutch-size nearly always is three eggs, which are coloured grey to pale-green or olive with small dark spots. Incubation is performed by both adults for c.4 weeks and chicks fledge after another 5-6 weeks. Banded dotterels first breed at one year of age.

Banded dotterels are solitary feeders both during the breeding season and non-breeding season. On the wintering grounds they often defend prime feeding areas on tidal flats and lagoon edges. They often feed at night particularly at estuaries. Like most other harbour waders, banded dotterels will form roosting flocks of sometimes many hundreds of birds. Often the night-time high-tide roosts are in relatively inaccessible sites, e.g. islets, presumably to minimise predation risk by mammals.

Banded dotterels are primarily carnivorous, but also take berries of shrubs such as Muehlenbeckia and Coprosma. Animals eaten are varied and reflect local availability, e.g. crustaceans, worms and flies at many coastal sites. On the breeding grounds the diet is more varied and includes spiders, beetles, insect larvae, adults and subadults of many aquatic insects, e.g. mayflies, stoneflies and caddisflies, as well as terrestrial flies.

A small compact brown and white plover with a short black bill, relatively long dark legs and large round dark eyes. Breeding males have a broad chestnut breast band with a narrow black neck band above it; females have both bands but they are duller.

Anxiety calls from a pair of adults in riverbed