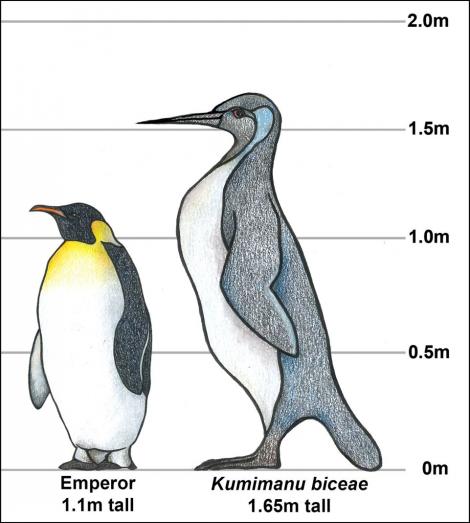 The remains of this colossal fossil penguin were found in a boulder on a North Otago beach near Oamaru in 2004. The species is known only from the unique specimen. Many species of fossil penguin have been discovered in New Zealand but Kumimanu stands out as being particularly large and unusually old. The size of this species shows that some of the earliest penguins were giants (i.e. much larger than the emperor penguin) and that such sizes were achieved at the dawn of penguin evolution, soon after the extinction of the non-avian dinosaurs 66 million years ago.

In 2015, painstaking work by preparator Al Mannering extracted the bones of the Kumimanu specimen from the hard rock that it was encased in and it was only then that the bones were able to be identified as being from a penguin.

The age of Kumimanu is notable because the only older penguins known globally are two much smaller species from Canterbury, New Zealand. These species, Waimanu manneringi and Waimanu tuatahi, are 58-62 million years old, while Kumimanu is 55-60 million years old. Kumimanu and Waimanu are considered to be each other’s closest relatives. In combination, these fossils indicate that penguins may have originated in the Zealandia region.

The unique specimen is identifiable by its enormous size, its age, and a combination of bone features which show a close relationship with other early penguin species. These include the broad head of the humerus when compared with the relatively narrow humerus shaft width, the rounded rather than flattened ulna, and the shape of the coracoid and scapula. Nothing is known about the external appearance of Kumimanu but other early penguins have exceptionally long beaks.

Kumimanu rivalled the largest penguin species ever found. It is estimated to have stood 1.65 m high and weighed 101 kg, compared with the emperor penguin at 1.1 m high and 30 kg. Two isolated broken bones of a c.40 million year old Antarctic species, Palaeeudyptes klekowskii, may have come from a slightly larger bird, but the Kumimanu specimen consists of multiple bones (coracoid, scapula, sternum, humerus, ulna, femur, tibiotarsus and vertebrae), showing that this species was consistently huge throughout its body. At 161 mm, Kumimanu has the longest femur ever reported from a penguin.

At the time of deposition, the site where Kuminanu was discovered would have been much warmer than present day Otago. It is a common misconception that penguins only live in cold water – many other penguin fossils have been found at sites that would have had warm temperatures, and today the Galapagos penguin (Spheniscus mendiculus) lives at the equator.

The unique specimen probably died at sea and sank to the bottom of the ocean where it was buried by sediments, only to be uplifted later by tectonic movements.