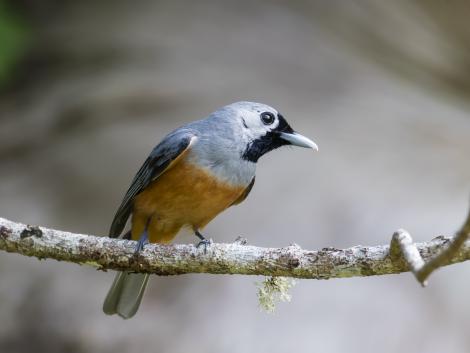 The monarch flycatchers are a diverse group of small bush birds whose claim to being on the New Zealand bird list rests on a single record of a black-faced monarch caught by a cat. While recognised in the family Monarchidae here, some authorities consider the species to be part of the Dicruridae, which also includes the fantails, drongos and boatbills. Species in the genus Monarcha are found in Indonesia, New Guinea, Australia, Micronesia and the Solomon Islands, with seven closely related genera, believed to be derived from a Monarcha-like ancestor, on other Pacific Islands.

Adult black-faced monarchs are blue-grey above and on the upper breast, sharply demarcated from the rest of the underparts, which are striking orange-rufous. The species' name refers to the black face and chin of adults. The legs are blue-grey and the robust bill is a slate-blue colour in adults and darker in juveniles. The sexes are alike and there is no seasonal variation. Juveniles lack the black face mask, are browner dorsally and paler orange ventrally.

Voice: the vocal repertoire of black-faced monarchs is poorly known but the main call "why-you-which-yew" is a common sound in eastern Australian forests; apparently only the male sings and normally only near the nest.

Similar species: no other New Zealand bird species has a similar appearance. The one bird found in New Zealand was initially identified as a masked woodswallow, as that was the closest match in a New Zealand field guide at the time.

The black-faced monarch is a common bird of coastal southeastern Australian forests. It is migratory, moving north in February-April after breeding, mainly to New Guinea for the winter, and returning in September-November. Migrating birds move during the day and night either singly or in small groups. Black-faced monarchs are arboreal and mainly inhabit rainforests, but they occur also in sclerophyll forests and occasionally in suburban areas.

The sole New Zealand record was an immature male caught by a cat at Stratford, Taranaki, on 19 April 1996. The timing of this bird's arrival coincides with the species' northern migration when it appears to have been blown across the Tasman.

Black-faced monarchs have been reported incubating from October to February, usually nesting among dense foliage. Social organisation in the species is poorly known but birds are normally seen either singly or in pairs, or occasionally in small family groups.

Black-faced monarchs eat mainly insects, taking prey by gleaning from foliage, and occasionally from the air. They forage at all heights within forests, including on the ground occasionally. The stomach of the New Zealand bird contained only some tiny chitinous fragments.

A small songbird with a black face and chin, robust slate-blue bill, blue-grey plumage above and on the upper breast, orange-rufous plumage below, and blue-grey legs. The sexes are alike with no seasonal variation; juveniles lack the black face mask, have darker bills, and are browner dorsally and paler orange ventrally.