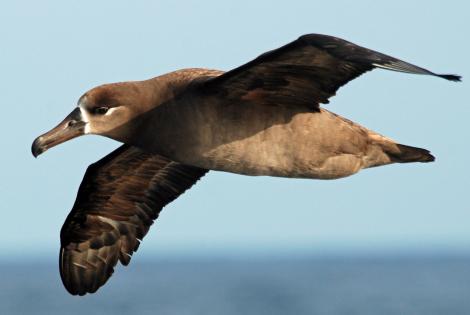 The black-footed albatross is the smallest of the three northern hemisphere albatross species, the others being Laysan albatross and short-tailed albatross. Most black-footed albatrosses breed at islands in the Hawaiian archipelago (USA) with the rest (5%) breeding on outlying islands of Japan. There is an estimated global breeding population of 64,500 pairs each year. The species was recently reclassified as Near Threatened by the IUCN Red List. After breeding, birds disperse widely over the North Pacific Ocean, especially towards North America. There are occasional records in the southern hemisphere including one from New Zealand.

Adult birds are dusky brown with white around the base of the bill, below each eye, across the rump and under the tail. The large bill, legs and feet are black. The sexes are alike. Juveniles are uniformly brown with a pale brownish bill with dark grey tip, becoming black with age.

Nests on undisturbed sandy coasts of uninhabited low-lying coral islands and atolls in the Hawaiian archipelago, including Midway Atoll and Laysan Island (USA), and on the Izu, Ogasawara, Senkaku and Torishima islands (Japan). Formerly bred at Northern Mariana Islands, south of Japan, at Iwo Jima, Nishinoshima, Chichijima Retto (Anijima), Hahajima and Miyakojima islands (Japan), the Marshall Islands, and Johnston Atoll (USA), south of the Hawaiian archipelago. After breeding, birds disperse widely over the North Pacific Ocean, mainly north-east, towards coastal waters of North America. Occasional records in the southern hemisphere, including one of a bird collected in July 1884 at Dusky Sound in Fiordland. Birds forage over deep water, near coasts and in open ocean. Several birds tracked by satellite flew over 15,000 km from their breeding grounds in the Hawaiian archipelago to the continental shelf off Oregon and northern California during foraging trips.

There is an estimated global population of 64,500 breeding pairs in at least 14 locations. The largest populations are circa 24,000 and 21,000 pairs on Midway Atoll and Laysan Island respectively, together accounting for 73% of the global population. On Torishima Island, 914 chicks were reared from 1,219 pairs in 1998, compared with 20 in 1964.

Until 2013 this species was classified as Vulnerable by the IUCN Red List, mainly due to fisheries bycatch. It was reclassified as Near Threatened in December 2013 after analysis of recent data suggested its population is not undergoing a rapid on-going decline and is now either stable or increasing. Other threats include ingestion of marine plastic debris and predation by introduced predators. Birds sometimes eat plastic debris at sea, mistaking it for food. When this is regurgitated and fed to chicks they can die from starvation as a result of a blocked digestive tract. All introduced predators (except house mice on Midway) have been eradicated from the north-western Hawaiian Islands. Feral cats are present on Wake Island and rats are present on Lehua and Kaula islands, and the Japanese breeding islands. Introduced predators may be a factor inhibiting re-colonisation at some historical breeding islands.

A colonial, annual breeder at the north-western Hawaiian Islands (USA) and several outlying islands of Japan, with small numbers breeding at several islands on the Pacific coast of Mexico. Colonies often associated with other seabirds. Elaborate courtship displays include bowing, preening, head-shaking, bill-touching, bill-circling, sky-pointing, and flank-touching. Pairs approach closely while opening wings and performing a mutual dance. Birds arrive at colonies in October. Monogamous, with adults taking a break from breeding in some years. A single white egg with brown spots is laid mid-November to mid-December. The nest is a scrape sometimes ringed with grass, located near beaches. Incubation of 65-66 days and chick-rearing of 140-147 days shared by both parents. Chicks fledge and depart during June-July. Age at first breeding 5-8 years.

Breeds on coastal beaches on tropical and subtropical islands and atolls with sparse vegetation. During incubation, adult birds at Tern Island forage in the vicinity of the island. The foraging range extends during chick rearing to include the distant and more productive Californian Current. Forages singly or in groups, sometimes in hundreds, mostly during daytime. Catches prey at the sea surface by surface-seizing and surface-diving. Follows fishing vessels to scavenge discarded fish offal and grab baits from submerged longline hooks.

Feeds mainly on flying fish and their eggs, other fish, squid and shrimp, fish offal discarded from fishing vessels, and carrion including other birds.

A medium-sized dusky brown albatross with white around the base of the bill, below each eye, across the rump and under the tail, large black bill, and black legs and feet. Juveniles are uniformly brown with a pale brownish bill with dark grey tip, becoming black with age.

Calls from birds on colony. Aircraft at end