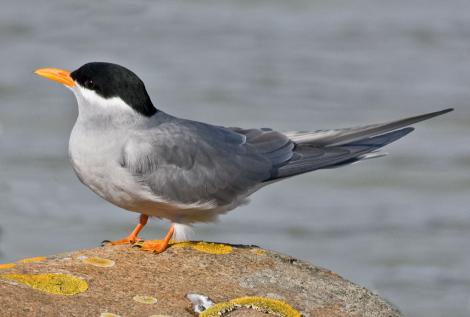 The black-fronted tern is a small grey tern commonly seen on braided rivers, estuaries and harbours of the eastern South Island. They breed on the braided rivers of the eastern South Island, dispersing to coastal areas after breeding; it is during this time that some birds are seen in the North Island. The black-fronted tern is an attractive and highly distinctive bird in breeding plumage, with the slate grey plumage contrasting with the black cap and bright orange bill. Juveniles and immature birds may be confused with other vagrant tern species but all are easily separable. In addition to feeding on rivers, estuaries and offshore waters black-fronted tern are often observed flying over pasture and arable fields with their distinctive buoyant flight, hawking insects and picking worms from the ground.

A familiar tern of the eastern South Island, the black-fronted tern is a distinctive small grey tern with a moderately forked tail, very short legs and short bill sharply decurved at the tip. The adults are striking in breeding plumage, with the pale grey body plumage contrasting with the black cap, narrow white cheek stripe and bright orange bill. In non-breeding plumage, they have a mottled grey cap, a black patch around the eye and ear coverts, and a black tip to the bill. Juvenile and immature birds are similar to non-breeding adults, but have the crown and nape more heavily streaked or mottled black, some buff scaling on the back, and the bill is dark brown with some dull orange at the base.

Voice: black-fronted terns are noisy at colonies, especially when attacking intruders by diving, calling harshly and often striking the intruder’s head. The usual call is a repetitive “kit”. Away from colonies, roosting and feeding birds are usually silently.

Similar species: vagrant whiskered tern has similar breeding and non-breeding plumage but is much smaller, with proportionally shorter wings and a shorter, less deeply forked tail, and grey rump. Black-fronted terns can also be confused with non-breeding white-winged black tern which is much smaller, lacks a forked tail and has distinctive black “ear muff” patches behind the eye.

Black-fronted terns breed only on the braided riverbeds of the eastern and southern South Island, from Marlborough to Southland. They are found on or near braided channels of inland rivers and streams, often at high altitudes, and on nearby farmland, either under pasture or cultivation. They are less often seen over scrub and tussock. After breeding, birds disperse to coastal areas roosting in sheltered harbours, estuaries and lagoons, foraging mostly offshore but also on near-coastal farmland. Small numbers of black-fronted terns visit the North Island in winter, mainly to Wellington, Wairarapa and Hawke’s Bay, but occasionally as far north as the Kaipara Harbour. They were formerly regular in the Bay of Plenty, but are now scarce there.

Black-fronted terns breed in a dynamic habitat, and as a result they are threatened by a wide range of factors. These include habitat loss due to hydroelectricity development, weed encroachment of braided river breeding habitat, and recreational use of rivers. But the most significant impact is predation by introduced mammalian predators. Black-fronted terns and their nests are preyed on by rats, stoats, ferrets, feral cats, and hedgehogs. In addition, on some rivers there is significant predation by southern black-backed gulls and swamp harriers, both of which species have become more numerous following human-induced alteration of their habitat and food supply.

Black-fronted tern and other braided river birds have been the focus of a range of conservation actions in attempts to increase their productivity. This includes predator control, weed management, and advocacy with gravel extraction firms on a number of rivers or river sections. Despite this, pest control has had limited success in improving breeding success of black-fronted tern and the challenges of protecting braided river birds in a habitat as dynamic as a braided river has not yet fully been accomplished.

Black-fronted terns are colonial breeders. Nests are placed on shingle bands on braided rivers, away from vegetation, and are simple scrapes in sand or amongst river stones, lined with a few fine twigs. Most colonies are small, typically 2-50 pairs, but they can contain up to 250 pairs. Nests are widely spaced within colonies, with 0.4 nest/ 100m² (range 0.1-2.9 nests/100m²). Laying occurs from October to December, and sometimes into January. Late eggs are probably replacement clutches. 1-3 eggs are laid, although most nests have 2 eggs. Incubation is shared and lasts 25 days. Chicks leave the nest 1-3 days after hatching, often moving away from the colony. Parents feed chicks on invertebrates and small fish and skinks carried back to the chicks in their bill. Chicks fledge after 4 weeks and are fed by adults for at least two weeks after fledging. Black-fronted terns first breed at two years old. Adults return to the same river to breed each year, although colony location can shift between years.

Black-fronted tern usually feed solitarily over river channels, but can form flocks when feeding over pasture, in particular when following a plough. On rivers they repeatedly work a channel, working their way up stream before circling back around to start over. They obtain food by contact-dipping (dipping to touch the surface with their bill only) to take emergent nymph mayflies and stoneflies, or plunge diving to take small fish. Birds from a colony in the Eglinton Valley, Fiordland specialise in catching skinks on the river flats.

During the breeding season black-fronted terns feed on emerging nymph and subimago mayflies and stoneflies or small fish or in nearby fields or river flats on earthworms, grass grub larvae and skinks. After breeding, most birds move to the coast where they feed in coastal waters up to 50 km from shore, taking mostly planktonic crustaceans. They also often feed over wet pasture on earthworms, especially during rough weather.

Pair of birds chasing each other in flight (skylark in background)