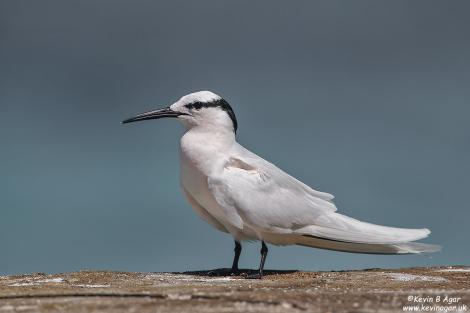 Widely distributed across the tropical and sub-tropical islands of the Indian and western Pacific Oceans, the black-naped tern is a rare straggler to New Zealand with a single storm-blown record from Auckland in 2022.

A slender tropical tern with almost entirely white plumage and deeply forked tail. A well-defined black band extends from the lores to the back of the head, widening to cover the nape. The wings are very pale grey, with a dark leading edge to the outermost primary. The black bill is long, tapered, and slightly down-curved, and legs dark maroon. Juveniles have mottled black upperparts and more diffuse head markings, with a darker carpal bar and flight feathers, which are retained into immature plumage.

Black-naped terns are wide-ranging, occurring on tropical islands of the Indian and western Pacific Oceans. They breed on the Seychelles and Maldives, through southeast Asia and Indonesia across to northern Australia and western Polynesia. Offshore sand cays, coral cays, continental islands, sandy beaches and spits are their preferred habitat. They forage inshore while breeding, often over reefs, and occur more regularly at sea outside this time.

A single bird was observed at the Muriwai gannet colony after ex-tropical Cyclone Dovi made landfall, and was found dead the following day (February 2022).

Breeds in colonies of 5-20 pairs, and sometimes up to 200 pairs. Nests are made close to the high tide mark in shallow depressions in sand or gravel, as well as on artificial structures. Birds are resident around some colonies year-round, but migratory from others. The population on the Okinawa Islands in southwest Japan winters around Indonesia (austral summer).

A long-winged oceanic tern with white plumage and pale grey wings, a long black bill and legs, and forked tail. A thin black band stretches through the eye around the back of the head to form a black nape. Immatures have a more diffuse mask, and black carpal bar and wingtips.