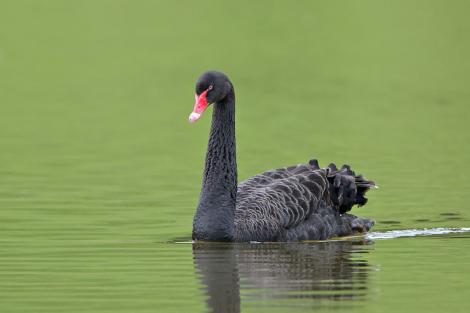 Black swans were deliberately reintroduced, initially from Melbourne, in the 1860s. Their distribution and abundance within a few years of those small reintroductions suggests that, coincidentally, natural re-colonisation may have occurred. Periodic immigration from Australia may still occur but has yet to be confirmed.

Widespread and common in eastern and south-western Australia and Tasmania, the black swan also ranges into the continent’s interior following heavy rain events.

A large black swan, usually seen floating on water. When the wings are lifted, or when flying, pure white flight feathers are visible, which are black-tipped in immature birds. The bill is a bright red with a terminal white band, the eyes are red, and the legs are dark grey. Both sexes are alike, but the female is noticeably smaller than the male. Cygnets are grey with a black bill, and newly-fledged young are dull greyish-brown with a brown eye. On land swans walk slowly and are ungainly. In flight, the birds labour and their conspicuous white flight feathers elicit a whistling sound.

Voice: generally described as “a musical bugling” given primarily as a contact call between mates and often accompanied by flicking  head movements. Hisses when defending young or when threatening.

Similar species: the only other swan in New Zealand is the larger and all white mute swan, which is very rare.

Black swans are widely scattered throughout New Zealand and on the Chatham Islands. Occurs on most lakes and larger constructed ponds, and also on estuaries, which are an important feeding and moulting habitat. Gathers in large flocks on selected estuaries (e.g., Awarua Bay, Farewell Spit, Tauranga Harbour, Kaipara Harbour) in January–February to moult, at which time the birds are flightless.

Black swans are common, with a national population of about 50,000 (2011). Formerly much more numerous but the widespread loss of aquatic plants, their preferred foods, from most lowland lakes has greatly reduced their numbers and made those swans still present more reliant on lakeside land plants and grasses.

Previously identified as being structured into regional populations, with key breeding lakes and associated estuarine areas for feeding and moulting for each. However, as a consequence of the eutrophication of most lowland lakes, this structure may have broken down and swans may be more dispersive.

Black swans are a legal gamebird in most parts of New Zealand with up to 7,000 shot annually (2011). They are unprotected on Chatham Island, where eggs are also gathered periodically to effect population control. Some lakeside farmers are intolerant to swans grazing their pastures, especially in winter, and require Fish & Game Councils to harass the swans or cull their numbers.

Black swans breed only on freshwaters. However, even at major breeding sites, the majority of birds present seem not to participate. Most breeding occurs as monogamous territorial pairs defending all or part of a pond, small lake or lake edge. Formerly there were extensive nesting in colonies on large lakes with profuse lake-bed aquatic plant beds and with fluctuating water levels (e.g., Lakes Ellesmere, Whangape and Wairarapa) but this habit is now rare primarily because most lowland lakes are eutrophic and dominated by algal blooms. Nesting may commence in July with a large mound of vegetation being accumulated at a secluded site on the water’s edge. On average 5-6 pale green eggs are laid and incubated for about 36 days mostly, but not exclusively, by the female. Young fledge after about 120 days, but families may remain together for several months. Occasionally, and where lake food is plentiful, a pair may nest again in late summer and raise a second brood.

Colonial nesting generally occurs later in the year (September–November) and coincides with the post-winter decline in water levels. There is considerable mating promiscuity, and large clutches (7-14 eggs) result from females laying in unattended nests. Some creching of young occurs where lake food is abundant.

Black swans are graceful, slow swimmers which, even when in flocks, seem to be associated in pairs. The larger male raises its elaborately crinkled upper wing feathers (coverts and tertials) in sexual and threat displays. Both members of a pair perform elaborate greeting displays to each involving head flicks and trumpeting calls. A substantial proportion of the total population remains dispersed as flocks on fresh and estuarine waters throughout the year, and the ages of these birds and of social structures in the flocks remains unknown.

Black swans are entirely herbivorous, preferring submerged freshwater plants such as Egeria, Elodea, Potamogeton and Myriophyllum, and Ruppia in brackish waters. When lakes levels are high and submerged plants unreachable, or when submerged plants are sparse, swans will graze lakeside pastures onto which they can swim or walk. In estuaries, the main food is Zostera. However they require freshwater and they favour Zostera beds in close proximity to incoming streams or drains or estuarine channels carrying strong freshwater flows at low tide.

A large black swan with a bright red bill with a terminal white band, red eyes, and dark grey legs. Females are markedly smaller than males; both sexes have conspicuous white flight feathers.