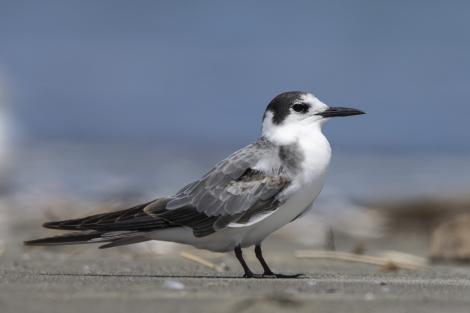 The black tern is one of four marsh tern species found worldwide and the rarest in New Zealand, with one accepted sighting north of Wellington in 2022. When breeding it is a small black tern with grey wings. It is pale in non-breeding plumage (as was the only local record). Like the closely related white-winged black tern, the black tern can be found in a range of freshwater and estuarine habitats. The nominate form breeds in Eurasia, migrating to Africa to winter, while the North America subspecies migrates to Central and South America.

The black tern is a small slim tern with striking breeding plumage - the head and underbody are jet black and upperparts slate grey, with a white leading edge to the wings. The vent and undertail coverts are clean white, and bill and legs black. In non-breeding plumage, they have entirely white underparts and mottled grey to black upperparts, darkest on the flight feathers and carpal bar. They retain a solid black crown with a club-shaped marking behind the eyes, and have diagnostic dark grey shoulder tabs visible at rest or in flight. Juveniles have slightly darker brownish upperparts. Similar to white-winged black terns, they are short-winged with a short forked tail, and buoyant flight.

Voice: gives a high-pitched kik-kik-kik call in flight, and sharper teek-teek or teeuw in alarm.

Black tern comprises two distinct subspecies. The Eurasian black tern breeds sparsely across Europe, east across Russia to Mongolia in central Asia. They winter in Egypt and along the west African coast. American black terns breed from central California and British Columbia across North America to Nova Scotia. They migrate to the Central and South America coasts down to Peru and Suriname. Preferred breeding habitat is freshwater and brackish wetlands, but outside of breeding they frequent lakes, rivers, wastewater ponds and estuaries, rarely travelling far inland.

Black terns are extremely rare in the Australasian region, with only five records known - three from Australia, one from New Zealand, and one from Papua New Guinea (the sole record of a bird in breeding plumage).

A single bird of the Eurasian subspecies (C. n. niger) was observed associating with large numbers of white-fronted terns at Waikanae estuary for a week (January 2022), before moving south to Plimmerton for a further two weeks.

Black terns nest in loose colonies in areas of favourable wetland habitat, foraging up to 5 km away. They are gregarious year-round and strongly migratory, flying over land or sea.

Black terns are primarily insectivorous, specialising on aquatic insects captured by dipping and hawking. They will also take small fish, amphibians, and crustaceans where available.

A small tern with a black head and body, grey wings and tail, and black bill and legs. Non-breeding adults have white underparts, a club-shaped black area behind the eyes that connects with blackish markings on the crown and nape, grey back, shoulder tabs and wings, and a dark carpal bar visible at rest.