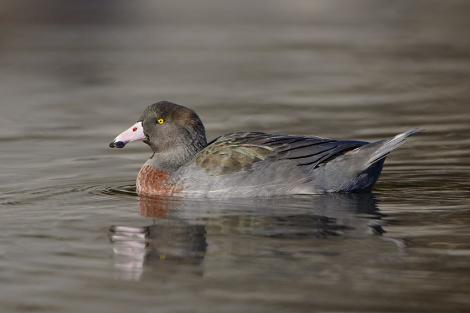 The blue duck or whio is an iconic species of clear fast-flowing rivers, now mostly confined to high altitude segments of rivers in North and South Island mountain regions. Nowhere common, it lives at low densities and its shrill “whio” whistle above the noise of turbulent waters will usher in a long-remembered encounter.

Adults of both sexes are alike, being uniformly slate blue-grey with chestnut spotting on the breast, a pale grey bill with a conspicuously expanded black flap at its tip, dark grey legs and feet, and yellow eyes. During aggressive interactions, or when birds are suddenly frightened, the bill epithelium is flushed with blood, and appears distinctly pink. Males are larger than females, have more breast spotting and more prominent greenish iridescence on the head, neck and back. Immatures are similar to the adults but from late summer to about August their eye is dark, their bill a dark grey and their chest spotting sparse and dark.

Voice: male blue ducks give a high-pitched wheezy disyllabic whistle, “whi-o”, from which the Maori name ‘whio’ is derived. The main female call is a low rasping growl given in response to disturbance or as a threat.

Similar species: the blue duck is unlike any other species when viewed in close proximity. From a distance and in poor light, its size and shape may be confused with grey duck or mallard from which it can be readily distinguished by its uniform colouration and, if on the water, by its prominent tail tilted upwards and its head held erect.

The blue duck is endemic to New Zealand and present in the North and South Islands only. Its pre-human range extended from high altitude tarns, lakes and rivers to segments of bush-edged lowland rivers and lakes. It is now patchily distributed in rivers in forested headwater catchments along the axial ranges of both islands. Here and there it extends downriver from these refugia into waters of modest gradient (50-80 m fall per km) provided riparian forest persists and the river runs clean.

Nesting females are especially vulnerable to mammalian predators, particularly stoats and possums, while rats and weka have been implicated in nest and egg destructions. The duck’s widespread declines throughout South Island beech (Nothofagus) forests areas has highlighted the insidious effects of mast-seeding of beech trees fuelling a mouse population boom, closely followed by stoat increases and, when mice numbers crash, the predators focus on hole-nesting birds and vulnerable ground nesters like blue ducks.

The effectiveness of small scale riparian predator trapping programmes points to a conservation remedy. However, with blue ducks residing at low densities (an average of 1 pair per km of river), the scale at which this remedy has to be applied to protect remaining populations is daunting.

Blue ducks are monogamous and fiercely territorial; the territory and pair bond are maintained throughout the year. In the North Island, nesting begins in late August, with the first ducklings usually in late September. Breeding is approximately 3-weeks later in much of the South Island. Renesting is uncommon and rarely occurs later than November. Nests are generally well hidden from above and sites include riverside caves, holes in river banks, at bases of fern clumps or beneath fallen trees. Nests are generally close to the river edge. While the female is incubating, the male waits on the riverside in close proximity to the nest. The pale white eggs (each 60-65 g) are laid at 1.5-2 day intervals (e.g. 5 eggs in 8 days, 6 eggs in 10 days). The average clutch is 5 or 6 (range 3 – 8) and the incubation period extends for 33-35 days. Both parents guard the ducklings during their 70-80 days until fledging and the brood is raised entirely within the territory. The mature ducklings gradually disperse from the territory when their parents start their post-breeding moult and are forcibly challenged and evicted by the adults after moulting. Average productivity is 1.3 fledglings /pr/yr.

Blue ducks are generally encountered year-round as territorial pairs dispersed serially along a river, with occasional single males attempting to claim space between widely separated pairs. Once established, the territory is generally held for life. Mate changes (whether of male or female) as a consequence of death or displacement rarely induce a change in territory location and pattern of use. Juveniles first attempt to establish territories near their natal territory. This causes high levels of genetic relatedness within sections of rivers and strong genetic patterning between rivers. Settlement of birds in rivers beyond their natal catchment is very rare.

Blue ducks have a diet comprised almost exclusively of freshwater invertebrates, of which chironomid larvae and cased caddis fly larvae are the most prominent. Essentially any freshwater invertebrate is eaten and there is no evidence of selective feeding. Berries from streamside plants have been recorded in the diet of alpine-dwelling ducks but not elsewhere. During periods of prolonged river spate, the birds scrape at silt-laden rocks consuming silt and periphyton. Ducklings feed on the same foods as adults, and dive in shallow water within days of first reaching the river.

A large slate blue-grey duck with chestnut breast, pale grey to pink bill with black flap at the tip, dark grey legs and feet, and yellow eyes. Males are larger, have more chestmut on the breast and more greenish iridescence on the head, neck and back; immatures are similar to the adults but with dark eyes and bill, and sparse darker chestnut spotting.