Geographical variation: There are four subspecies recognised spread throughout the tropical seas of the world. The subspecies anaethetus breeds in the Indian and western Pacific Oceans and presumably is the form most likely to occur in New Zealand. 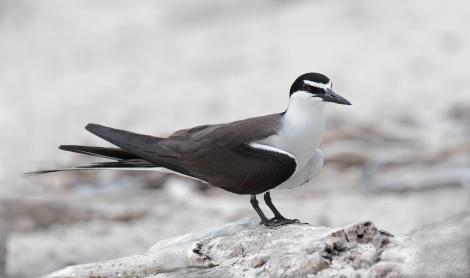 The bridled tern is widespread in the tropics, and is known in New Zealand from a single beach-wrecked bird found in Canterbury in 1987. The eggs and sometimes even the adults were formerly gathered by sailors to replenish their stocks of fresh food. The scientific name, anaethetus, meaning senseless or stupid, bestowed during this time, was based on the ease with which they were able to do this.

Bridled terns are elegant, medium-sized tropical terns, with long slender wings and a long, deeply forked tail. They are smaller than a white-fronted tern and only a little larger than a black-fronted tern. They are sooty brown above and white below, with black on the crown with a white forehead and eyebrow. They are very similar to the sooty tern which is also a rare vagrant to mainland New Zealand but much more likely to be found here. Immature birds are broadly similar to the adults, but the back is greyer and has a scaly pattern formed by pale feather edges. The face pattern is less distinct with the brown cap streaked with white and the white markings sometimes smudgy, the diagnostic white stripe above and extending behind the eye remains. The white under surface from chin to vent is different from immature sooty terns which have an all-dark face and breast with white only on the belly. Some immature bridled terns have the chin darker but still obviously paler than the rest of the head.

Voice: bridled terns are generally silent at sea. They may be noisy at breeding colonies and roosts, uttering a variety of short harsh calls and also a yapping call reminiscent of a small dog or a pied stilt.

Similar species: in breeding plumage an adult bridled tern may be distinguished from a sooty tern by its smaller size and the colour of the upper surface, especially the back, being greyish brown (cf. blackish brown for sooty tern). More important are the details of the head pattern with a black crown, less of a white forehead and a white stripe running back over the eye and finishing just behind the eye instead of at the front of it. A dark stripe through the eye finishes at the base of the upper mandible rather than the gape as in sooty terns. In all plumages the under wing pattern is distinctive with the bases of the primaries white rather than dark as in the sooty tern so that the wing tips are white edged with black. The legs and feet are dark grey and the eye is black. In nonbreeding plumage the adults look very similar, having a paler and less striking crown and eye stripe with some pale flecking. Many of the brown feathers on the back and upper wings have fine white or light brown edges and the tail is shorter and not so deeply forked. The grey-backed tern (another very rare vagrant to New Zealand) is very similar to the bridled tern, differing in having a paler grey back, contrasting with the darker upperwings.

Bridled terns breed widely in Western Australia, across the north and along the Queensland coast but are very rarely found in the south and south east. Their range has slowly extended southwards since about 1940. In the Pacific they breed to the west of a line from the Philippines, through Palau to Samoa andTonga but not further east. Birds from the southernmost colonies are migratory, probably moving north after breeding, with band recoveries suggesting that birds breeding in Western Australia winter near the equator in Indonesian waters.

Bridled terns usually nest in noisy colonies, often associated with other tern species. The breeding season begins in spring, birds usually arriving at the colonies from August to November and departing after a successful season in April or early May. In the non-breeding season they are usually found alone, offshore, often far from land and, characteristically, may roost on floating objects from coconuts to fishing boats. They are pelagic feeders in tropical waters found particularly where seaweed and flotsam gather such as current convergences.

Bridled terns feed mainly in the open sea, taking small schooling fish up to 6 cm long, with some squid and crustaceans. Prey items are caught from the surface or top 20 cm of the water, by dipping or dives in which the body is seldom fully submerged.

A medium-sized tern with long slender wings and tail, sooty brown above and white below, and black on the crown with a white forehead and eyebrow. Adult birds have a diagnostic white stripe above and extending behind the eye; immature birds are similar to the adults but the back is greyer and has a scaly pattern formed by pale feather edges.