Geographical variation: Four subspecies recognised; New Zealand birds are of the subspecies A. s. pileatus which has a wide distribution in the Indian and Pacific Oceans 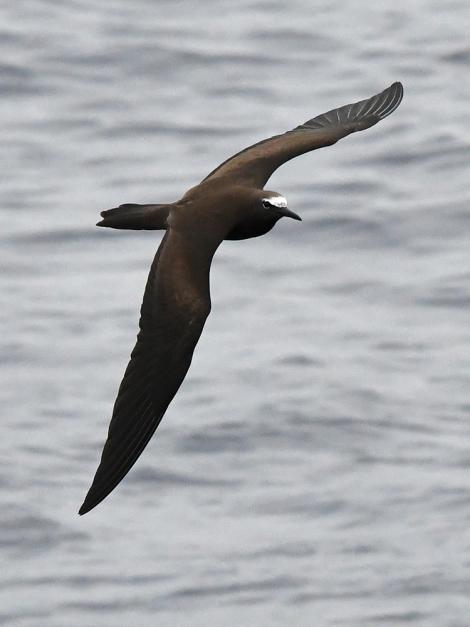 Despite being a widespread tropical seabird, the brown noddy was only discovered breeding in the New Zealand region in 1989, when a small colony was found on Curtis Island in the southern Kermadec Islands.

Both the scientific names, Anous and stolidus, refer to a notion that noddies are stupid because they are easily caught, and are derived from the Greek and Latin words for stupid or foolish.

The brown noddy is a dark brown tern with contrasting darker flight feathers, a prominent white forehead and crown, distinctive pale under-wing coverts, and a long tail. Immature birds have a duller pale crown and pale tips to some feathers. The bill is black, the legs and feet are dark brown. The down colour of small chicks at the Kermadec Islands is almost entirely white. The species has buoyant flight and a lanky appearance.

Voice: the common calls are a grating karrk, kree-aw and a low kuk kuk kuk.

Similar species: the brown noddy is most easily confused with the black noddy, which (as the common name suggests) is a blacker bird; it is also smaller with a notably shorter tail and thinner and straighter bill. Juvenile sooty terns are largely dark but have pale dorsal speckling, are smaller, and never have a pale crown.

The brown noddy is a very rare bird in the New Zealand region. Its only breeding site in the region is on Curtis Island in the Kermadec Islands. There are four reported records of the species elsewhere in the New Zealand region, with unverified records from the east coast of the North Island in 1885, and “high seas” in the 19th Century; the two well-documented occurrences were dead birds found on Muriwai Beach in June 1992, and near Waitara, Taranaki in June 2002.

At sea, brown noddies may be seen in coastal waters close to their breeding sites, or in more offshore waters. They disperse widely in the non-breeding season.

An abundant species in tropical waters but only about 25 pairs nest in New Zealand - all on Curtis Island in the Kermadec Islands. This may be a newly established colony.

At the Kermadec Islands, brown noddies nest as isolated pairs, but elsewhere large colonies can occur. At Curtis Island in October-November 1989, most nests contained eggs, although a few chicks were present from October. This indicated that the laying period there includes September to November and that the fledging period includes December to January (based on data from Higgins & Davies 1996).

At the Kermadec Islands brown noddies are gregarious at sea. Their flight is direct and low to the water, with nesting pairs making conspicuous flights together. Little behavioural and ecological information has been recorded for the New Zealand population.