Geographical variation: A native North American goose with an extensive history of population isolation and substructure and with each such grouping distinguishable by size and phenotype. The taxonomy accorded to these groupings remains labile but there is gathering agreement for two species to be recognised, a large-bodied B. canadensis and a small-bodied B. hutchinsii within each of which are several geographic races accorded sub-species status. The New Zealand population is primarily descended from an importation of 50 birds in 1905. The size and plumage characteristics of these birds, when examined in 1970, matched those of the then largest race recognised, B. canadensis maxima. 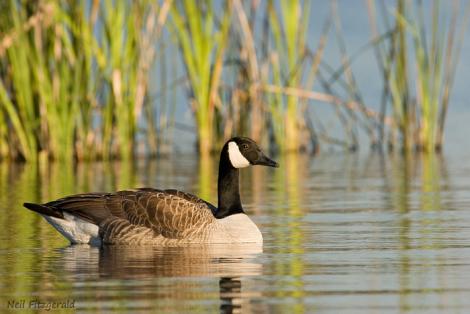 The distinctive and well-known Canada goose is a North American native that has been extensively introduced to UK, Scandinavia, and North Sea nations from Denmark to France, Russia and Ukraine, as well as New Zealand.

A large light-brown goose with black neck and head and a conspicuous white chinstrap. The breast and abdomen are barred white and light brown, and the abdomen and under-tail is white. Back and upper wing surface a darker brown. Bill, legs and feet black, eye dark brown-black. Sexes alike but females are noticeably smaller than males. Goslings have yellowish-grey down and the juveniles appear as dull versions of the adult.

Voice: a distinctive and loud honk given when the birds are disturbed or surprised, or when flying.

Similar species: none. Other geese in New Zealand include the rare and vagrant Cape Barren goose and feral flocks of the domesticated greylag goose.

Canada geese are widespread in the South Island and most numerous in pastoral areas of the eastern foothills of the Southern Alps from Marlborough to Central Otago, and around coastal lakes and lagoons. Their distribution is expanding in Fiordland and Southland. In the North Island, their distribution still reflects locations at which birds were released during the past 30 years, with the largest concentrations in Wairarapa, Hawkes Bay, Ruapehu-Taupo area, and Waikato.

Pastoral land adjacent to a lake or large pond provides preferred habitat, but geese may also be found in well-forested mountain valleys, especially in Fiordland, and around alpine tarns. Communal moult gatherings at secluded or very large lakes with grazing available at the immediate margins.

Numbers are controlled by annual culls to reduce damage to lakeside pastures in some areas. Total population of about 60,000, two-thirds of which are in the South Island, and have been maintained at this number for most of the past decade.

Grazing of high-country lakeside pasture, especially autumn-saved pasture, is considered an economic burden for sheep farmers. Widespread irrigation to promote dairy farming in formerly dry country has allowed geese to remain year round and graze highly nutritious grasses. This prompted farmer advocacy to declare the bird a pest, and in 2011 the Canada goose was declared an unprotected species.

Nests as solitary pairs but often in close proximity to other members of the flock. Monogamous, with female completing all of the incubation over about 27 days, and the gander actively defending a small territory around the nest. The nest is a down-lined ground depression often hidden amongst rushes or short protective vegetation. Clutch size generally 5 white eggs. Laying is mainly in September–October but can also extend considerably later in the North Island, and second nestings have occasionally been recorded in December–February. Both parents actively guard the young during their 8-9 weeks of growth until capable of flight. The family may remain together for several months and join with other pairs and families into an extended flock. When pairs nest in close proximity, amalgamation of broods and shared parental duties are common.

A wary, flocking bird generally seen on grassland in open spaces or on a lake’s edge. Many flocks are extended multi-generation family groups and remain close to their breeding locations. Others, however, may undertake extensive moult migrations to larger waters where they undergo their annual wing moult. The bulk of these migrating birds are non-breeders or failed breeders; successful breeders usually moult their wing feathers on the breeding sites while still guarding their young.

Entirely herbivorous, preferring the sugar-laden bases of short grasses. Also very partial to clovers and other legumes and, occasionally, newly-germinated cereals. On the water they will nibble at seed heads of marginal sedges and feed on submerged plants such as Elodea and Egeria.

Anxiety calls of adult on nest