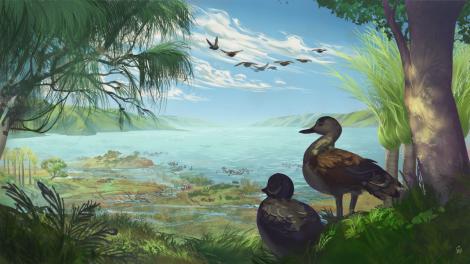 Catriona’s shelduck is the eighth and largest species of duck described from the St Bathans fossil assemblage. Its discovery and naming further underscores the importance of this site for understanding global anatid evolution.

The lacustrine deposits of St Bathans in Central Otago were formed in a huge palaeo-lake, named Lake Manuherikia. The area has produced a wealth of vertebrate fossils 18.7–15.9 million years old, in the Miocene epoch.

Catriona’s shelduck is closely related to the previously described shelduck from the St Bathans assemblage – Miotadorna sanctibathansi - and is placed in the same genus. It is characterised by its large humerus (142.5 mm long), with a wide proximal end and a narrow distal end. Its size is that of a small goose. It was a tadornid shelduck, so in life it would have somewhat resembled the living paradise shelduck. Tadornid shelducks are relatively long-necked, long-legged ducks that tend to graze on grass, rather than being dabblers or divers.

Catriona’s shelduck’s formal description was based on a right humerus that is largely complete but distorted post-mortem. This holotype bone is held in the Museum of New Zealand Te Papa Tongarewa, Wellington (registration number NMNZ S.47273). It is named after Catriona Drummond (1954–2020), the mother of Nic Rawlence (one of the authors), who inspired his love of natural history.

New Zealand is known for its diverse anatid fauna, with 18 native breeding species in the recent fauna (ten of which became extinct after human colonisation). The rich St Bathans anatid fauna suggests that this family of birds has been an important part of Zealandia’s natural history for a long time.

Pole, M.; Douglas, B. 1998. A quantitative palynostratigraphy of the Miocene Manuherikia Group, New Zealand. Journal of the Royal Society of New Zealand 28: 405–420.