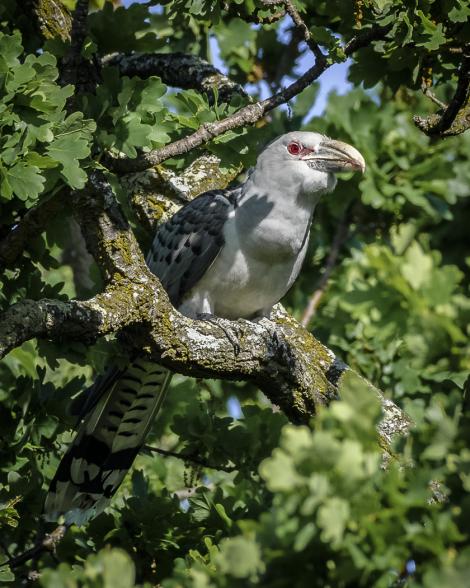 The channel-billed cuckoo is a huge cuckoo with an enormous pale bill, reminiscent of a hornbill. Its unusual elongated silhouette in flight is the source of its alternative name of ‘flying walking-stick’. It is both the largest cuckoo and the largest brood parasite in the world. The channel-billed cuckoo is a common migrant to Australia and a very occasional vagrant to New Zealand, where there have been six records scattered from the Far North to Invercargill.

Compared to other cuckoos, the channel-billed cuckoo is enormous. About the size of a New Zealand pigeon, it has a large, heavy downward curving pale yellow bill, and a very long grey tail with a black subterminal band and white tip. The head and neck are pale grey blue, merging into a paler breast and belly with faint barring. The back and wings are medium grey with rows of dark grey checks. The underwing is pale, with a prominent dark trailing edge. There is an orange-red patch of bare skin around the eye and to the base of the bill. Females are slightly smaller, with a smaller bill and paler, more barred undersides. Juveniles have buff rather than grey plumage, a less massive pinkish bill, and lack the red skin around the eye.

There are no similar species.

The channel-billed cuckoo has very large range, extending throughout Indonesia, New Guinea, Australia and Pacific Islands including the Bismark Archipelago. It breeds throughout coastal forests of northern and eastern Australia, where it is present between September and April. Preferred habitats include subtropical or tropical moist lowland forests, and subtropical or tropical mangrove forests.

The first New Zealand record of channel-billed cuckoo was a bird shot in Invercargill in December 1924. The second was a bird at Ngataki, Aupori Peninsula October 1986 to January 1987. Three were found dead in October-November 1996 at Ocean Beach, Raglan; Te Paki, Far North; and Pukerua Bay, Wellington. The last confirmed sighting was one at Mangawhai Heads in October 2002. Details of a bird seen on Motiti Island in January 2007 have yet to be submitted to the Records Appraisal Committee of Birds New Zealand.

The channel-billed cuckoo is an obligate brood parasite that lays its eggs in the nests of crows, magpies, butcher birds and currawongs. The introduced Australian magpie is a potential host in New Zealand. Courtship feeding has been observed in Australia, with the male presenting items of food such as insects to the female. Cuckoos have been observed working in pairs to provoke the host bird to leave the nest, allowing the female cuckoo to lay eggs in the host nest while the adult is distracted. Unlike most parasitic cuckoos, the chicks of the channel-billed cuckoo do not eject the host species’ eggs or chicks. However, the chicks of the channel-billed cuckoo grow quickly and dominate the food supply, and so the host chicks rarely fledge.

The channel-billed cuckoo is predominantly fruigivorous, mainly eating figs. It also takes large invertebrates, and the eggs and chicks of other birds. There are no records of its diet in New Zealand.

Anderson, M.G.; Hauber, M.E. 2007a. A recognition-free mechanism for reliable rejection of brood parasites. Trends in Ecology and Evolution 22: 283-286.

A giant cuckoo with a large decurved pale yellow bill, a long grey tail with a black band and white tip, and a pale grey-blue head and neck grading into a paler breast and belly with faint barring. The back and wings are medium grey with rows of dark grey checks, the underwing is pale with a dark trailing edge, and there is a red patch of bare skin around the red eye.