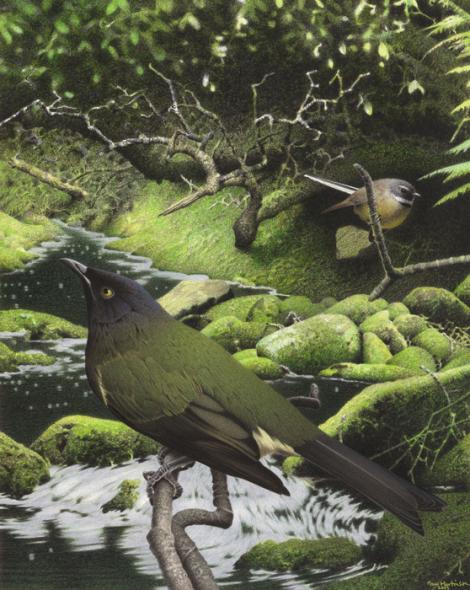 The Chatham Island bellbird was green with a short, curved bill, slightly forked tail, and noisy whirring, fast and direct flight. Adult males were olive green, slightly paler on the underparts, with the forehead and crown steel blue, changing to a purplish-blue gloss on the sides of the head, nape, throat and upperbreast; the wings and tail were blackish. Females were browner, with a narrow white-yellow stripe across the cheek from the base of the bill, and bluish gloss on top of the head. Adults of both sexes had bright yellow eyes. Juveniles were similar to females, including the yellow eyes, but had a yellowish cheek stripe and lacked the bluish gloss on head.

Chatham Island bellbirds were formerly found in native forest throughout the islands in the Chatham group, and were last recorded on Little Mangere Island in 1906.

In 1855 the Chatham Island bellbird was present in forest around Waitangi, but by the 1880s it was absent from the vicinity of human settlements and more common in the as yet undisturbed forest of the southern part of the main island. In the early 1870s Travers found it in great numbers on Mangere Island, less common on the main island, and rare on Pitt Island.

The little information available is contradictory. Henry Travers reported that breeding commenced in October and continued into the summer, Potts gave the breeding season as August-October inclusive. However, an immature collected between May and July 1840 was moulting into adult plumage and the early timing of this moult supports the August-October breeding season. The nest had a diameter of 18 cm, and so was larger than that of bellbirds on mainland New Zealand. It was composed mainly of dry grasses with fibrous twigs on the outside, and lined with wool and small feathers. The clutch was typically 3 pink eggs with reddish-brown blotches on the larger end; the eggs measured 26 x 19 mm.

Buller considered the Chatham Island bellbird to behave similarly to the mainland species. If so, it would have been territorial when breeding, but may have left the territory to feed at nearby sources of concentrated food, such as nectar. Males were substantially larger than females and so probably dominated at concentrated food sources such as nectar-rich flowers. The outer primaries of males were notched and these produce a whirring when the birds are in flight, and so males probably accentuated the sound during territorial disputes.

No information was recorded. However, on mainland New Zealand, the closely related bellbird feeds on nectar, insects, spiders, and fruits.

Millener, P.R. 1999. The history of the Chatham Islands’ bird fauna of the last 7000 years – a chronicle of change and extinction. Pp. 85-109 in Olson, S.L. (ed.) Avian paleontology at the close of the 20th century: proceedings of the 4th international meeting of the Society of Avian Paleontology and Evolution, Washington, D.C., 4-7 June 1996. WashingtonD.C., Smithsonian Institution Press.

A medium-sized olive-green honeyeater with a short decurved bill, bright yellow eyes, and blackish wings and tail. Adult males had paler underparts, with the forehead and crown steel blue, changing to a purplish-blue gloss on the sides of the head, nape, throat and upperbreast; females were browner with a narrow white-yellow stripe across the cheek and bluish gloss on top of the head.