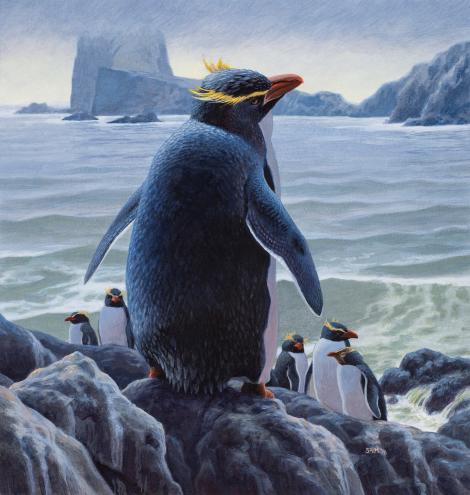 The species is named in honour of John Warham (1919-2010) who carried out pioneering studies on crested penguins.

The occurrence of Chatham Island crested penguin bones in archaeological middens shows that it was hunted and consumed by humans. As one of the largest endemic birds on the Chatham Islands, it would likely have provided a valuable food resource for the first settlers, leading to its ultimate extinction. It has the dubious distinction of being the only penguin species known to have become extinct because of human activity.

Millener, P.R. 1999. The history of the Chatham Islands’ bird fauna of the last 7000 years – a chronicle of change and extinction. Pp 85-109 in Olson, S.L. (ed.) Avian paleontology at the close of the 20th century, Proceedings of the 4th International meeting of the Society of Avian Paleontology and Evolution. Washington, DC: Smithsonian Institution Press.